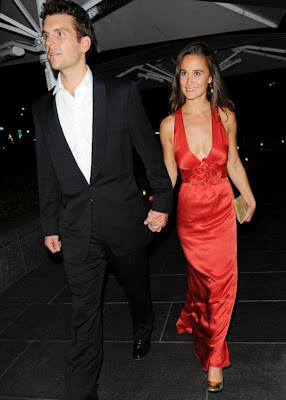 Pippa showed no fear when she stepped out for the ball over the weekend - letting an exclusive red satin dress cascade around her golden pumps.
The royal sister-in-law's attire really made her stand out, as she was snapped attending the Westminster charity ball.
The dress featured a floral design positioned underneath the very revealing low-cut front, giving Ms Middleton a classy look with just enough sexiness to tease the paparazzi with.
Adding to the look, Pippa held a golden clutch bag - letting us know why she is royalty when it comes to fashion.
Other royal names who arrived for the occasion included Princesses Eugenie and Beatrice as well as ex-girlfriend of Prince Harry, Chelsy Davy.
Geri Halliwell was also present wearing a red number.
Pippa was spotted by the press kissing her date for the night - boyfriend Alex Loudon - outside the Park Plaza Hotel. Wearing that spicy red dress must have really paid off!

Read more: http://www.metro.co.uk/lifestyle/877646-pippa-middleton-in-a-sexy-red-dress-dare-to-wear#ixzz1ad2vjsIh
Posted by Joshua Lopez at 11:27 AM