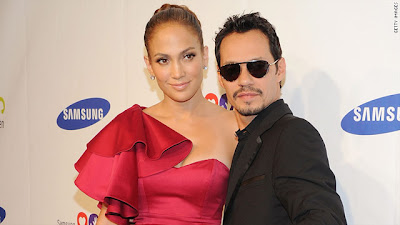 Both have proven to be civil and i find it rather admirable.


CNN:(PEOPLE.com) -- Dirt diggers are advised to look elsewhere. Marc Anthony says that he and Jennifer Lopez split for the simple reason their marriage didn't work anymore.
"I'll tell you that it wasn't something sensationalistic happening," Anthony, 42, tells ABC News.
Asked about reports their seven-year marriage ended because of infidelity, Anthony says "absolutely not."


"It was a realization on both our parts. So you know it wasn't shocking. These things happen," he says. "It was a decision that we made jointly."


Anthony says that he'll continue to work on his reality show "Q'Viva! The Chosen" co-starring his now estranged wife.


"This is not a funeral. This is not a burial," Anthony says. "This is just two people who came together and just realized -- and so I'm saying that it wasn't sustainable the way it was, and that's that."