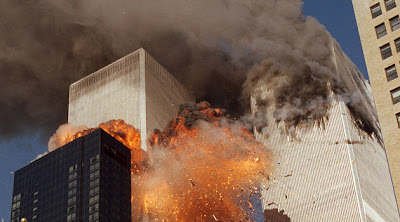 The way in which the towers collapsed looked typically the work of high tech dynamite and couldn't have been done by planes alone.

The long-serving former Malaysian premier Mahathir Mohamad says Arab Muslims are incapable of carrying out the 9/11 attacks on the United States that killed nearly 3,000 people.
The ageing firebrand, who was in power in Malaysia at the time of the attacks and stepped down in 2003 after 22 years in power, slammed former US president George W. Bush ahead of the 10-year anniversary Sunday of 9/11.

Washington blames the attacks on Al-Qaeda.

"Bush lied about Saddam's weapons of mass destruction... If they can lie so as to kill Iraqis, Afghans and American soldiers, it is not unthinkable for Bush & Co. to lie about who was responsible for 9/11," the 86-year-old wrote in his blog on Friday.

Listing out reasons in line with a conspiracy theory that the US government was behind the attacks, he wrote the Twin Towers in New York "came down nicely upon themselves".
"I believe Arab Muslims are angry enough to sacrifice their lives and become suicide bombers. But they or their handlers do not strike me as capable of planning and strategising such attacks so as to maximise the damage to the enemy," he said.

Mahathir, a fierce critic of the West, is known for his anti-Jewish and anti-American statements in Muslim-majority Malaysia.

Last year, he said if the US could make the 3D science fiction film Avatar, "they can make anything", adding there was strong evidence that the 9/11 attacks were staged.
He has also condemned Bush and then-British prime minister Tony Blair as "child killers" and "war criminals", saying they should be put on trial for the military invasion of Iraq.
Read More@ http://my.news.yahoo.com/9-11-conspiracy-theories.html
Posted by Joshua Lopez at 11:45 AM