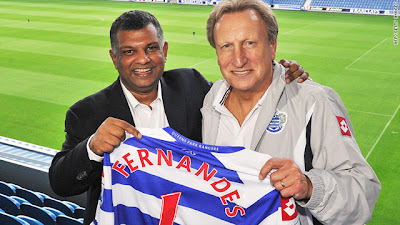 The owner of low-cost airline AirAsia purchased a 66% controlling stake in the West London club from Formula One chief Bernie Ecclestone and Flavio Briatore. The Mittal family, led by steel magnate Lakshmi Mittal, will retain their 33% shareholding.

The 47-year old, who was educated in England, admitted he actually followed London rivals West Ham as a youngster but he has "a soft spot" for QPR having lived near the stadium. "I've always wanted to be involved in football and the appeal of a London Club, like QPR, was too good an opportunity to turn down," he told a press conference at the club's Loftus Road stadium. "QPR is a raw diamond and hopefully I can contribute into turning it into a diamond."He will take over as Chairman of QPR Holdings Ltd and be joined on the board by joint Tune Group owner Kamarudin Bin Meranun.

The club also revealed Amit Bhatia will resume his position as Vice Chairman -- he left the club earlier this year following a disagreement with the previous board.

QPR won promotion to the Premier League last season, after more than 15 years out of England's top division. The move will earn the club, which went into financial administration in 2001, an estimated $66 million from broadcasting income and other sponsorship.

However Fernandes told CNN he was not a financial "sugar daddy" and planned to build the club sustainably. "Even if there was a sugar daddy or a sugar mummy, one day that tap would switch off, he said. "That drug is so deep that the club wouldn't be able to respond to not having a gravy-train of cash. "But if you would a good infrastructure, it doesn't matter who's leading this club, it will go forward."

He told reporters at a press conference Thursday that his ambitions for the club would be realistic. "I could easily say we're going to win the Champions League and the Premier League, but that's really not my style," he said.

Far from a novice in the world of professional sport, Fernandes is also the team principal of Formula One's Team Lotus, after spotting the opportunity to reintroduce the legendary carmaker to top level motor racing in 2009. The team went on to achieve their target of tenth place in the FIA Formula One World Championship the following year.

Fernandes believes many people have yet to realize the value of sport as a brand. He said the success of his airline -- which in 10 years has gone from flying 200,000 to 32 million passengers -- was linked to its association with sport.

"We've grown this way because we've invested in sport, be it in referees, Manchester United or Formula One," he said.

"So it's all part of interacting and building a community. People need hotels, they love sport, they love entertainment and they need to fly to different places. They are all inter-linked.
"Football is a fantastic branding platform."

After graduating from the London School of Economics in 1987, the entrepreneur worked as an accountant for Richard Branson's Virgin Records brand from 1987 to 1989.

The amateur guitarist went on to become vice-president for Southeast Asia for Warner Music Group from 1992 to 2001.

In a dramatic change of direction, Fernandes left the music industry to buy AirAsia, a bankrupt carrier -- the purchase cost him a token fee of 26 cents.

Since taking over the low fare, no frills airline, he has become known as the Branson of air travel in Asia, a reference to the British entrepreneur's own hugely successful move into the aviation industry.