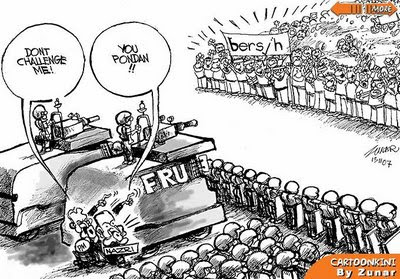 KUALA LUMPUR, July 7 — Police have obtained court orders to prevent 91 persons associated with Bersih, Umno Youth and Perkasa from entering Kuala Lumpur this Saturday, and also to shut down city roads, to effectively paralyse any attempts to rally on the day.

City police chief Datuk Amar Singh also said that the public are strongly discouraged from going into the city on Saturday.

The persons named in the court orders can be arrested on sight, he added.

“The public can enter but we urge the public not to enter Kuala Lumpur on that day,” Amar replied when asked if the restriction order included the public.

The individuals named in the orders include 66 from Bersih, 14 from Perkasa and 11 from Umno Youth.

Amar said the individuals named in the court order were being personally served the restriction notice today.

He said the restriction order was clear and that all of the 91 individuals are barred from even passing through the city between 8am and 6pm on July 9 — whether on foot or in any vehicle, including the public buses or trains.

He said those who breached the order would be committing an offence under Section 188 of the Penal Code, which is considered disobeying a public servant who is lawfully empowered to keep the peace and can be jailed up to six months and fined up to RM2,000.

“If they want to gather elsewhere, they will have to have a permit,” Amar said when asked if any action will be taken against those 91 if they assembled just outside the restricted zones.He said the police have not received a single application for a permit from any party to date.He also advised the parties to ensure they have booked the premises before applying for the permit as the police will have to consider the security angle of the chosen location.
Posted by Joshua Lopez at 10:14 AM