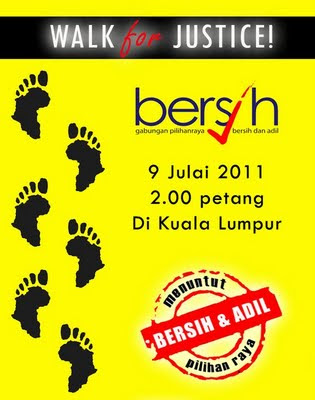 JUNE 17 — We’ve heard it all. Dire warnings issued, threats yelled out, police reports filed, scathing commentaries published in incredulous and incredible news sheets. And all this prior to the planned Bersih 2.0 rally on July 9, 2011 in Kuala Lumpur.

If these “noises” were to be believed, our collective mind would be filled to the brim with mental pictures of Bersih participants, in the worrying words of Perkasa boss Ibrahim Ali, throwing stones and burning cars!

Why, these people might even go the whole hog and work themselves into a frenzy on the streets of Kuala Lumpur, wildly throwing Molotov cocktails into the tourist spots of, say, Bukit Bintang, storming the Parliament building, running amok and attacking whoever dare come their way.

Additionally, such wild and irresponsible behaviour, as this impression suggests, would have horrible consequences for members of the general public as it would hurt hard, for instance, the pockets of businesspeople, taxi drivers, and even hawkers, not to mention the immense traffic jam that would clog the busy streets of Kuala Lumpur. And, lo and behold, their rash and violent actions would be a dangerous threat to “national security.”

But is Bersih 2.0 really the wily monster that it has been made out to be? Are they really a motley people who desire is nothing but to behave unruly on the streets and cause riots along the way? Are they so politically mischievous that groups like Perkasa are prompted and compelled to call to jihad to protect “public security”?

The last time I checked, the first Bersih rally was relatively peaceful and successful in Kuala Lumpur. Bersih 2.0 is a civil society group, assures its chairperson Ambiga Sreenevasan, which plans to organise a peaceful street demonstration with the aim of bringing to the attention of the general public a list of demands pertaining to the manner by which elections are held in the country.

By no stretch of the imagination can this primary objective be considered as being synonymous to breaking the law and pushing the country down a slope to anarchy and disrepute. And the fact that the Bersih group holds dearly the notion of democracy and the right to expression and peaceful assembly explains why Ambiga respects the democratic right of other groups in the civil society, such as the right-wing Perkasa, to oppose her group in a peaceful fashion.

In other words, Bersih has as much right as Perkasa to stage a peaceful demonstration in Kuala Lumpur, a right that is enshrined in the country’s constitution. Besides, one would think – and hope – that the law enforcement agencies would see to it that the street demonstrations remain civil and peaceful and that possible emergence of agents provocateurs would be quelled. Additionally, traffic jams would be kept to the minimum by these agencies so as to lessen the inconvenience possibly faced by the KL road users.

And if it seems too risky a venture to have both parties jeering at each other at close range, then the police may want to direct them to opposite directions. Or, allow them to demonstrate on a different day to avoid verbal, and perhaps physical, confrontation.

For some strange twist of logic, Bersih 2.0 has also been accused by certain groups or individuals of being anti-Malay and anti-Islam. Again, this boggles the mind of morally upright and concerned Malaysians as the campaign that is being forged by Bersih 2.0 is aimed at gaining a universal appeal as shown below – and not one that promotes the interests of a certain ethnicity or faith against those of other communities.

A visit to the Bersih 2.0 website reveals, among other things, that their demands are to: (a) clean the electoral roll; (b) reform postal vote; (c) use indelible ink for voting; (d) have free and fair access to media; (e) to have minimum 21 days of campaign period; (f) strengthen public institutions such as the Election Commission, and the judiciary; (g) stop corruption; and (h) cease dirty politics.

In short, these are meant to ensure that the playing field is even to all and sundry, which should be in the interest and concern of all Malaysians, irrespective of ethnic and religious backgrounds, who treasure democracy, fairness, justice, transparency and accountability.

Surely these demands for electoral reform and justice are not against the true teachings of Islam and other revealed religions. If anything, the respective followers of these religions are enjoined to fight against material corruption and the corruption of public institutions in the long march towards strengthening democracy.

As if this isn’t enough to insult our intelligence, someone had put forward a suggestion that the forthcoming Bersih 2.0 rally be held in a stadium away from the attention and scrutiny of the larger society. To be sure, street demos are not meant to be confined to a closed area as we would musical concerts such as Lady Gaga’s, Justin Bieber’s and other forms of gigs.

Thus, when you think of the good things that Bersih 2.0 is helping to champion for the betterment of our society, you can’t help but suspect that the ugly depictions or premonitions of the forthcoming rally are merely desperate attempts by certain quarters to divert the attention of concerned Malaysians away from the vital issues of free and fair election, democracy, transparency, accountability and freedoms of expression and of assembly. Or, is the rumbling from the likes of Perkasa calculated to merely “offer” justification to the powers-that-be to stop the Bersih 2.0 rally from happening?

To reiterate, a free and fair election would go a long way towards strengthening democracy, the benefits of which can be gained by almost everyone, including the businesspeople, hawkers, taxi drivers, taxpayers etc.

Surely, it’s not dirty thinking on the part of concerned Malaysians to crave for a Bersih Malaysia!
Posted by Joshua Lopez at 7:22 AM