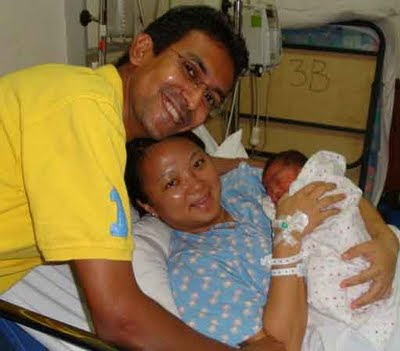 It's Rightfully A Legal & Private Matter that Hannah Yeoh & Ram have decided on their child's race to be registered as 'Chinese'. Indians who are against this are bigots who have no respect to a person's right of choice & privacy, these are Indians who suffer an inferiority complex & do not know how to mind their own bloody business (just as in Tamil Dramas!).

When you are of mixed parentage and the NRD only entitles the choice of one race to be registered, the child then can be either one or "Lain-Lain". For example, when a child is of Indian-European parentage, the child is Eurasian, NOT Indian. Some Bloody Indians need to get their facts right & learn how to mind their own bloody business!

In This time and age, children are hardly of one race, mixed parentage is a norm around the whole world but these Indians, no matter what Nationality they are, they still think of themselves as Indians from India! These lot can never evolve and never head with the world towards globalisation. They are stuck in their own cocoon of utter stupidity and practises that no longer make sense in this time & age!

They should keep their mentality, culture and practises in their own homes and not use it as a benchmark to evaluate or intrude the civil rights and privacy of others! Such Poor Upbringing! Again i stress here, it's the sole decision, business & privacy of Hannah & Ram. Period.

PETALING JAYA: Selangor MCA has expressed its sympathy to the Indian community who are unhappy with Subang Jaya assemblyman Hannah Yeoh over the racial identity of her newborn baby girl.

Its Public Complaints Bureau said it regretted Yeoh's action in not putting the ethnicity of Shay Adora Ram as that of her Indian husband.

Bureau adviser Datuk C.K. Lim told a press conference that based on convention, the child's ethnicity should follow that of the father.

“Her husband is an Indian and it is customary to name the child's ethnicity as Indian,” he said, adding the assemblyman's initial stance to define her baby as anak Malaysia (child of Malaysia) was politically motivated.

The issue began when the baby was defined as Chinese after the NRD in Putrajaya declined the couple's initial proposal to use anak Malaysia as an ethnicity or race of their child. Yeoh had claimed she and her husband opted to leave the column for “race” blank but was rejected by the NRD official who attended to them.

To safeguard their daughter's interest, the couple then registered Shay as Chinese, for the timebeing.

Earlier, scores of Indians from various non-governmental organisations in Petaling Jaya handed over a memorandum to Lim at the MCA complaints bureau here.

The group's spokesman P. Balakrishnan said Yeoh's husband Ramachandran Muniandy had demeaned the Indians by not standing up for his right to decide the race of his child.

He urged the NRD to cancel the baby's birth certificate and issue a fresh one identifying her race as “Indian”. In Kuala Lumpur, Home Minister Datuk Seri Hishammuddin Hussein said the registration of anak Malaysia as a child's ethnicity or race would involve changes to the country's laws and amendments to the Federal Constitution.

“Whatever changes involving this matter will need amendments to the law and considerations on the constitution,” he said.