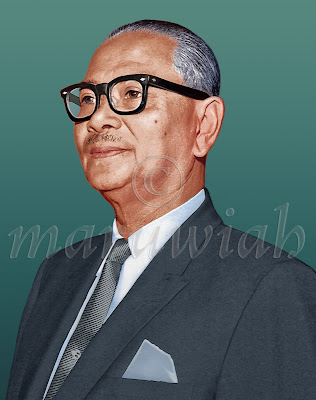 ON TUNKU THE MAN

I believe in living and being happy, otherwise what the hell do you want to live for? How long do you expect to live for? Only yesterday I was running and jumping about as a kid, then as a young man, then a grown-up man, now I can't even walk. So why the hell do you want to make a nuisance of your life and make other people unhappy? Your duty when you take over leadership of the country is to make the people happy, that is the main thing. Whatever the sport, I was a very keen sportsman. I have always been an outdoors man, a lover of all the wild things in life. I used to go shooting. I was not a good shot but whenever there was anybody who wanted to go to shoot tigers or wild boars, I would be there. I was in a district where there was plenty of this sort of thing but I used to fall asleep!

DID YOU SHOOT ANY TIGERS?

I have not shot any myself but I have been to shoot tigers. They would build a platform on top of the tree. I used to drink whisky a lot in those days. I used to wait for the tiger to come and take the carcass but before half an hour was up, I would be fast asleep. Nobody would want to go with me afterwards because they said I snored too loud and drove the tiger away.

He was very fond of drink. He went to Pattani by elephant. All the time he was throwing the whisky away while they were travelling in the jungle. So when he came back from Patani, he had a stroke.

In 1963, Lee Kuan Yew led Singapore into Malaysia. Two years later, Singapore became an independent country, ruled by Lee's People's Action Party, or PAP.] We got to work very closely with Singapore when we were forming Malaysia . . . The British terms were that Singapore could not be on its own but was free to join Malaysia. So Kuan Yew accepted all the terms and it was only after he joined Malaysia that he started to interfere.

WASN'T THE PAP ITSELF CONTROLLED BY THE COMMUNISTS FOR A WHILE?

That is why the British were not keen to give them independence on their own. So they had to join us or carry on being a colony of Britain. That is why Kuan Yew decided to join us. After that he did everything possible to break away.

ON MALAYS IN BUSINESS

An affirmative action policy gives Malays and other bumiputras, or sons of the soil, preferential access to education, land, housing, civil service jobs and equity ownership in state-linked businesses.] Whatever happens, I feel that in the whole economic progress, you've got to take the whole country with you, you've got to pay more attention to those who have less and those who are a little inexperienced in this type of work. You have got to try and help them. But you cannot, so to speak, benefit one section of the people at the expense of another. That is the thing we must not do. I think on the whole, the Chinese and others are quite happy to help the Malays along and so we must not hurt their feelings or show discrimination in any sense in this matter, but try and bring them all along together and get them to try and help Malaysia.

In 1981 Mahathir Mohamad became Malaysia's fourth prime minister. Today Mahathir is one of Asia's longest-serving leaders.] He could set up a republic in this country within two weeks. All he has to do is put it to the parliament with his two-thirds majority, they accept it and if the consent does not come or is not approved or disapproved within two weeks, it becomes law. And so, he can turn this country from a monarchy into a republic in two weeks. He is an irresponsible man. He cares nothing for class, for law, for order, for the constitution. What suits him, he just does it. You remember once he said that you must be loyal, you must not idolize the leader? But what did he do? He called everybody to parliament to swear allegiance to him. Now he is going round the country on a so-called campaign . . . campaign for what? To support him, not to support the party.

IS MAHATHIR DEVELOPING A PERSONALITY CULT?