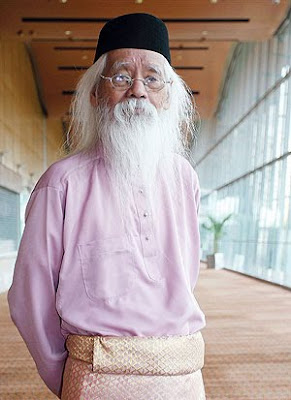 Bersih chairman Ambiga Sreenevasan promised the July 9 rally will go despite intimidation by the Najib administration, while national laureate A Samad Said slammed the police for hauling him in over a poem he recited at the Bersih launch last week.

He accused the Najib administration of turning poetry into a "weapon". Both Ambiga and Samad were asked to give their statements at the Dang Wangi police station on Monday. Meanwhile, Ambiga assured supporters that she did not plan to apply for a police permit as Home Minister Hishammuddin Hussein had already said he would not issue any. However, she made it clear the rally will be held.

“Instead of threatening people, engage with us,” she told reporters, who swarmed her outside the police station.

She also slammed the arrests of 30 Parti Sosialis Malaysia members in Penang for 'rekindling Communism' and waging war against the King.

“The authorities are caught in a time warp. Who talks about communists in this day and age?” she chided.

The Najib administration is going all out to look for excuses to stop the Bersih 2.0 rally, including linking it to communism. Their purpose is to scare of particpants as a successful and well-attended rally would show that he was losing popularity.

The Bersih organisers plan a peaceful march to the Palace where they will deliver a memorandum with 8 reforms to King seeking free and fair elections.

Meanwhile, septuagenarian Samad Said blasted the authorities for over-reacting to the Bersih rally.

He said he was being investigated under Section 4(1)(b) of the Sedition Act 1948 and Section 27(5) of the Police Act 1967 which relates to unlawful assembly and questioned for some 90 minutes.
"Poetry has now become something extraordinary; it has now become a weapon," he said. Pundits believed he was being victimised as the authorities feared his poetry could influence the Malays to take part in the rally. Samad is a prominent Malay-language and arts activist.
- Malaysia Chronicle
Posted by Joshua Lopez at 2:46 PM