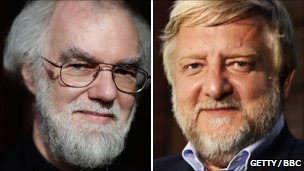 It was a meeting of titans, with Shakespeare on the menu.

One man described as "diseased with the reading bug" who also happened to be the Archbishop of Canterbury, and the other, Simon Russell Beale, known as the finest Shakespearean actor of his generation.
They were discussing the Bard's work at the Hay Festival, the festival in the Powys town on the Wales-England border which annually attracts many of the world's literati. This pair's knowledge of Shakespeare is considerable, of course.
But was he a Christian and did his beliefs play a part in his writing? After an entertaining hour of discussion, the packed audience were not sure, and Beale and the Welsh-born Archbishop seemed equally bemused.
I hoped that this would be one of the themes Dr Williams would touch upon in his talk with Beale. But from the start Dr Williams appeared reluctant, although they chatted about humanity, forgiveness and jealousy in Shakespeare's plays.
He was not a nice man... if he was a Christian he was not a saint”End Quote Rowan Williams Archbishop of Canterbury, on Shakespeare Dr Williams said: "We're not going to be discussing what Shakespeare's religious beliefs were, of which there have been plenty of arguments about."

But members of the audience were not going to let the Archbishop off the hook that easily.
Towards the end he was asked just that, in a roundabout way: "What were Shakespeare's religious beliefs? Was he Protestant or Catholic?" Dr Williams wasn't sure.
"I think he had a Catholic background, and friends who were Catholic," he said. He added that "everybody at that time" had Christian belief.
"He was not a nice man," said Dr Williams. "It's always quite shocking to hear that. If he was a Christian he was not a saint."
Following another similar question about Shakespeare's beliefs, Dr Williams said: "I don't think he (Shakespeare) was a devout churchgoer."
Beale said Shakespeare knew the gospel of Matthew very well, but he did not know if it was part of the writer's make-up or what he believed in. But he did not think Shakespeare was a churchgoer either.
Beale said he "treads very carefully" when it came to the Shakespeare biography, and there was controversy over whether he wrote all of his plays.
He said: "I bet by the time I'm 70 a substantial amount of his work will not be attributed to him." Somewhat inevitably, the pair were asked with whom of Shakespeare's characters they identified.
Dr Williams said that as a student he had played Dogberry,from Much Ado About Nothing, and Theseus in A Midsummer Night's Dream, but he did not identify with either of them. And while he was "drawn to the character of Lear", neither did he identify with him. He was a character he wanted to explore, like Macbeth, but he joked: "Not that you'd want a serial killer as the Archbishop of Canterbury".
By Carl Yapp BBC Wales News website
Posted by Joshua Lopez at 2:52 PM