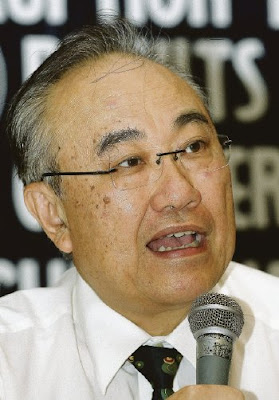 Do these bigots even know English to begin with?!


KUALA LUMPUR: "There was no pledge to make Christianity the official religion nor was there a pact to install a Christian prime minister," Transparency International Malaysia (TI-M) president Datuk Paul Low said.
Low said he had attended the "Unashamed Ethical Conference" (UEC) conference where a Bahasa Malaysia daily alleged church pastors made a pact to make Christianity the official religion of the country. The allegation was not true, he said.Low added that he was invited as a guest to speak on "Corruption in Malaysia and Instruments of Accountability" at the conference in Penang on May 5.

"I, as TI-M president and an independent witness, hereby confirm that the allegations are false," he told a press conference here yesterday.
When asked why he waited until yesterday to make the public announcement, Low said he believed clarifications should be made by the organisers first as he was invited there only as a guest."But now, seeing the matter is slowly spiralling out of control, I have to make a stand and hope the issue will not escalate."
He said making Christianity the official religion was not even mentioned throughout the conference and a dinner, let alone a pledge."The UEC was about promoting ethical, good values and clean living. The only pledge signed there was their commitment to say 'no' to bribery." Low said he could see how the event was misinterpreted and taken out of context.
He urged media editors to make sure their sources were reliable to avoid publishing articles that needlessly jeopardised the country's unity.Low said he had not been asked to give any statement to the police but he would gladly do so if needed.
Posted by Joshua Lopez at 10:55 AM