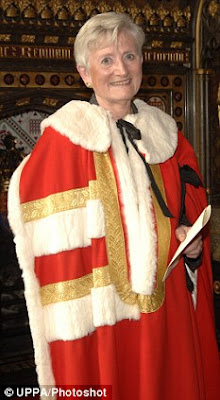 Baroness Is Moving On to Cyber Security In The Business World.


(BBC) Security Minister Baroness Neville-Jones has stepped down from the government "at her own request", Downing Street has said.

Baroness Neville-Jones was appointed to head the Conservative Party's security policy group in 2006 and took up her ministerial post in May 2010.

In a letter to David Cameron, she said it had been a "privilege" to serve. She will take up a new role working with businesses to boost their cyber security.

Baroness Angela Browning, the former Conservative MP and minister who stepped down from the Commons at last year's election, will take her security minister role.

Informing the prime minister of her decision to step down, Baroness Neville-Jones said a recent counter-terrorism review - which overhauled the system of control orders for terrorist suspects among other measures - had contributed to an "essential rebalancing" of the goals of security and liberty.

Security strategy A former diplomat and chairman of the Joint Intelligence Committee, she joined David Cameron's team in opposition and became minister for security and counter-terrorism at the Home Office after last year's election.

She played an important role in formulating the government's security strategy, and served on the National Security Council - established by David Cameron when he entered No 10. In her letter, Baroness Neville-Jones, 71, said she had previously informed the prime minister that she intended to step down in the near future. Her departure comes just days before the government marks its first year in office.

The former minister said she would continue to offer the prime minister and the Conservatives her full support. "It has been a particular pleasure to see the concept of national security as we conceived it reflected in the national security strategy and to have participated in the work of the National Security Council which has quickly established itself as an important part of the machinery of government," she wrote.

"I have also been able to contribute to the essential rebalancing of security and liberty in the review of counter-terrorism powers, the replacement of mistaken multiculturalism by an integration strategy which I hope will embed itself as a central feature of the 'Big Society', and to the redirection of the Prevent strategy which is nearing completion."'Sad'

In response, Mr Cameron said the former minister could be "very proud" of her contribution to security policy - particularly in seeking greater attention and resources to tackle cyber threats. "You have helped to ensure security and liberty are more appropriately balanced and dramatically strengthened the government's strategy to prevent young minds being poisoned and radicalised," he said.

Home Secretary Theresa May thanked Baroness Neville-Jones "for her hard work, both in opposition and in government, contributing to the rebalancing of security and liberty as well as participating in the work of the National Security Council".

Shami Chakrabarti, director of civil rights group Liberty, said: "Baroness Neville-Jones can be proud of seeing the repeal of intrusive ID card legislation through the House of Lords, though it was sad to see such a visceral critic of control orders in opposition forced to defend the coalition's rebranding of punishment without trial."

The BBC's Political Correspondent Ross Hawkins said that despite the apparent suddenness of her exit, it was being stressed that Baroness Neville-Jones was leaving for personal not political reasons.
Posted by Joshua Lopez at 2:16 PM