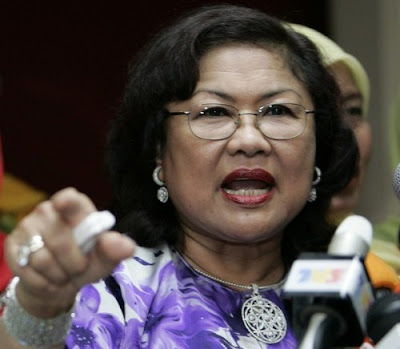 The proposed "1Melayu, 1Bumi" movement can affect the success of the 1Malaysia concept initiated by Prime Minister Datuk Seri Najib Tun Razak, Umno Supreme Council member Tan Sri Dato'Seri Rafidah Aziz said. Hence, she hoped the Malays would not fall for the idea as it could affect the existing solidarity in Malaysia.
In fact, she said the 1Malaysia concept was a very clear concept and it did not jeopardize the interest of any race in the country."It is not just a slogan, but instead, it's a reality that should be achieved to ensure that unity and stability will continue to prevail in the country," she told reporters after opening the Cheras Wanita Umno delegation meeting here Monday.
The former Wanita Umno chief also insisted that the concept of 1Malaysia, which refers to Malaysian Malays, Malaysian Indians and Malaysian Chinese, should proceed.On another development, Rafidah said Wanita Umno should prepare the party's election machinery to face the 13th general election by meeting voters face-to-face, so that all information about the government's strategic plans could be delivered accurately to the people."
We have to maintain the current government so that the nation's economic and social development can persist. Meet the people face-to-face at least three times before the next general election so that they will get a clear picture and will not fall for the opposition's lies," she said.
Rafidah said although the face-to-face approach seemed to be a little conventional, it had brought success to the party since it was first adopted, and hence, should be continued.-- BERNAMA
Posted by Joshua Lopez at 4:01 PM