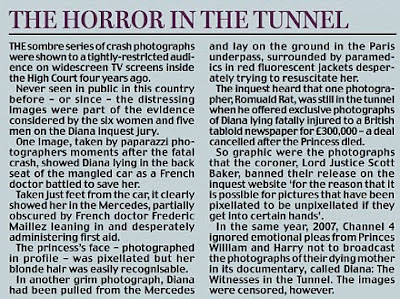 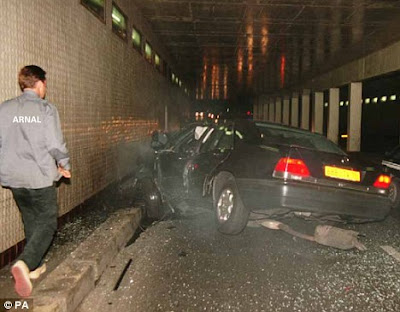 I find this move rather traumatic & disgusting but at the same time i am waiting eagerly for Justice for Princess Diana.
A shocking paparazzi photograph of a dying Princess Diana is to be screened for the first time in a documentary about her fatal crash.
Unlawful Killing, which will be shown at Cannes this week, is backed by the actor Keith Allen and Mohammed Fayed, whose son Dodi died with Diana.
The 90-minute film will include a graphic black and white close-up of Diana taken moments after the Mercedes carrying the couple crashed in a Paris underpass.
http://www.dailymail.co.uk/news/article-1385357/Princess-Diana-dying-photo-shown-Unlawful-Killing-Cannes.html

http://www.abc15.com/dpp/news/now_at_nine/princess-diana-photo-at-cannes-film-festival-sparks-outrage
Posted by Joshua Lopez at 11:14 AM