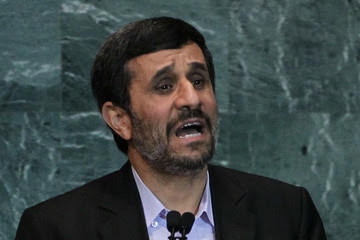 Thankyou CNN, i was rather puzzled as to why he has gone missing for sometime now and it became even more obvious that he was not to be seen during the high drama of OBL's Death.

Iran's president, Mahmoud Ahmadinejad, is not exactly the shy and retiring type. He loves attention. He makes outlandish claims, bold statements and outright lies - all to get the world to watch.

But over the last few days, we've been seeing his quiet side - so quiet that he actually disappeared from sight. For ten days late last month the president of the Islamic Republic of Iran skipped cabinet meetings and canceled official visits. He wasn't even seen in his offices.
He wasn't ill. He wasn't on pilgrimage.

What in the world was happening? Ahmadinejad was staging a boycott. Now, why would the country's leader have to stage a boycott? Because in Iran there's someone more powerful than the president - that's the Supreme Leader, Ayatollah Khameini.

We're witnessing a power struggle, and it's getting more intense. First, Ahmadinejad fired the minister of intelligence. The Supreme Leader blocked the move. Then, the president fired his foreign minister, another Khameini protege. This time the Ayatollah wrote a letter - not to President Ahmadinejad but to the deposed minister - reinstating him to his post.

This open tension is unprecedented in modern Iranian politics. Never before has the president of the Islamic Republic wielded so much power and never has he clashed so openly with the clerics.

Ahmadinejad has also been mounting an ideological challenge to the mullahs. He says that he, too, gets divine revelations, even though he is not a priest. He's talked about Iran's pre-Islamic past with great pride, which is something the clergy regards as sacrilegious.

Those in the know are watching closely to see who wins this internal struggle, and here's why it matters: These are the first major moves by Tehran's power players to position themselves ahead of next year's elections. There's a school of thought, which holds that President Ahmadinejad senses that people are tired of the clergy, so he thinks he could gain mileage by distancing himself from them.

Another theory holds that Ayatollah Khameini himself wants to be seen as separate from the government. Remember, inflation in Iran is at 25 percent. Some assessments show that unemployment is at 30 percent. So Khameini may need a scapegoat.

And, of course, this all comes as leaders of Iran's opposition movement, the Green Movement, remain under house arrest and many other opposition figures and journalists have been jailed. The Nobel Peace Laureate Shirin Ebadi is so worried for her safety that she is not returning to her country.

The big picture here is that the revolutions in the Middle East have gotten all dictatorships in the region worried, including the one in Tehran. Even as its key ally, Syria, descends deeper into chaos, the Iranian government has managed to rein in disaffection with a mixture of money, bribery and repression. Iran has learned from its own protests of 2009, and so far it doesn't seem likely that it will go the way of the Arab world yet.

Meanwhile, Washington is worried that Tehran is gaining mileage out of the regional unrest. Secretary of State Clinton says, "We do see activities by Iran to try to take advantage of these uprisings. They are trying to exploit unrest. They are trying to advance their agenda in neighboring countries."

But I think the Iranian regime is more nervous than it reveals. Sure, it will gain some foreign policy advantages – a better relationship with Egypt, for example. But it faces the much larger problem of the dissatisfaction of its own people who have now seen democratic revolutions in the Middle East that have succeeded. Perhaps that's why President Ahmadinejad took a break and went AWOL.
Post by: CNN's Fareed Zakaria
Posted by Joshua Lopez at 12:56 PM