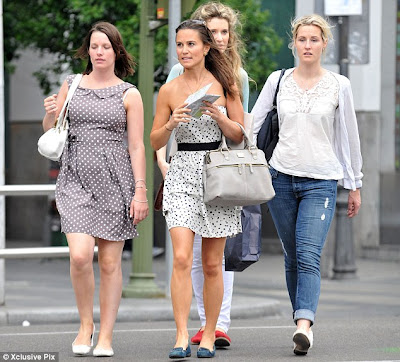 Rekindling An Old Flame...Perhaps they have the best chemistry to begin with...

It has only been a few days since Pippa Middleton was at the centre of speculation that she was about to tie the knot with her devoted boyfriend Alex Loudon.

But the City trader was nowhere to be seen when 27-year-old Pippa flew to Madrid for a weekend away with the girls...and her ex.

She was relaxed and happy in the company of old flame George Percy, the 26-year-old son of the Duke of Northumberland, one of Britain’s richest men. They dated while at Edinburgh University, where they were also flatmates, and have been friends for nearly ten years.

George helped Pippa with her luggage, pushing their trolley through Madrid airport on Friday, before heading to a hotel.

They emerged with friends at dusk, with Pippa carrying a bottle of champagne in a red bag, and headed to nearby Fortuna nightclub, one of Madrid’s most exclusive.

And if it was a heavy night, Pippa wasn’t going to let it show, emerging yesterday morning sporting dark sunglasses and wearing a strapless black-and-white spotted sundress as she led her friends on a shopping and sightseeing trip, tourist map in hand.

After a few hours on their feet the group stopped at a cafe for a glass of wine. Pippa was spotted stifling a laugh as she gave her approval to photographs taken on a friend’s camera.