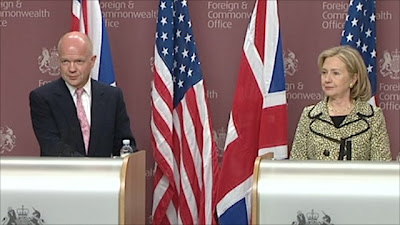 I must say that in good times and bad, both countries have been very much like brothers. Both are committed to World Order and Peace. Throw all your criticisms at them, i think they have done a good job and they continue to remain relevant to world order and peace. I greatly admire the democracy practised and upheld by both countries, it puts many countries to shame.

William Hague: "The US UK relationship is still special... still thriving, still a cornerstone of stability in our world"

UK and US step up security links

The relationship between the UK and the United States is "unique and indispensable", Foreign Secretary William Hague has said.

In a joint press conference with US Secretary of State Hillary Clinton, Mr Hague said the two countries stood side by side on issues like the Middle East peace process. Mrs Clinton said the US and UK had "a great working relationship". US President Barack Obama has arrived in the UK ahead of a state visit.

In a joint article for the Times, Mr Obama and UK Prime Minister David Cameron said the UK-US bond was "not just special" but "essential" - to both countries and to the world at large. "When the United States and Britain stand together, our people and people around the world can become more secure and more prosperous," they wrote.

"It is a perfect alignment of what we both need and what we both believe. And the reason it remains strong is because it delivers time and again."

Earlier, it was announced that the UK and US were setting up a joint body, the National Security Strategy Board, to look at threats from terrorism and rogue states.