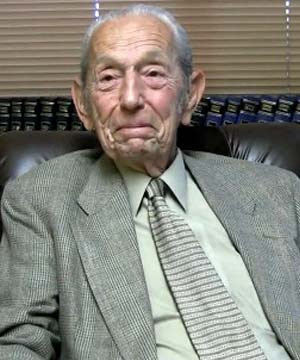 Stupid Old Senile Man! To begin with, does he even remember what's stated in the Bible?!

Matthew 24 v 36: but of that day no one knows, no, not even the angels of heaven but my father only

2 Peter 3:10 But the day of the Lord will come like a thief. The heavens will disappear with a roar; the elements will be destroyed by fire, and the earth and everything in it will be laid bare.

Luke 12:39-40 (NIV) "But understand this: If the owner of the house had known at what hour the thief was coming, he would not have let his house be broken into. You also must be ready, because the Son of Man will come at an hour when you do not expect him."

Evangelical priest Harold Camping has set a new date for the world’s end as he backtracked from a prediction that ‘Judgement Day’ was supposed to come last Saturday.The US Christian, who made headlines for his outlandish claim that a selected 200 million of the world’s population would be raptured, has now marked 21 October 2011 in his calendar as the real date for the apocalypse.

The 89-year-old had previously stated that an earthquake – bigger than anything ever felt before - would strike each corner of the planet by 6pm local time on Saturday 21 May.But according to Camping’s new end of world forecast, the globe will actually be engulfed by a huge fireball - exactly five months after the botched doomsday prediction.

Speaking of the failed ‘Judgement Day’ on his radio show last night, he claimed that 21 May 2011 was just an ‘invisible judgement day’ and that he understood it as a spiritual, rather than physical event.

After hiding in a motel for two days, the Californian preacher admitted his Bible-based calculations were incorrect.He said he believed rapture didn’t come because God decided to spare humanity five months of “hell on earth.”During his hour-and-a-half radio broadcast, he said: “It won’t be spiritual on 21 October.

The world is going to be destroyed all together, but it will be very quick.”Unfortunately for some doomsday believers, who had spent their time preparing for Saturday’s cataclysmic event by selling their homes and assets, Camping showed no signs of remorse.[Story: 'Judgement Day' celebration tragedy for US boy]One naive follower Robert Fitzpatrick, a retired transport worker put all his faith into Camping’s claims and had spent as much as $140,000 (£86,000) to advertise the doomsday prediction.

Camping told his listeners: “We just had a great recession. There's lots of people who lost their jobs, lots of people who lost their houses... and somehow they all survived.”“They should have relied on God and not me ... Family Radio is not in the business of financial advice”.Camping also inaccurately prophesied that the end of the world would occur back in 1994.He reportedly got the date wrong then due to a ‘mathematical error’.
Posted by Joshua Lopez at 2:43 PM