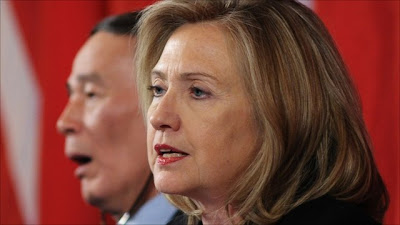 Even A Pragmatic Change Is Highly unachievable in a Communist Country!
China crackdown 'a fool's errand' - Hillary Clinton


(BBC) US Secretary of State Hillary Clinton has criticised China's crackdown on dissent as "a fool's errand", saying Beijing is trying to halt history. In an interview with The Atlantic, Mrs Clinton also called the nation's human rights record "deplorable".

She defended US dealings with Beijing, saying: "We live in the real world."

The BBC's Kim Ghattas in Washington says Mrs Clinton seemed to suggest the Chinese system itself would collapse and that democracy was inevitable.

The article quotes Mrs Clinton as saying last month that China's leaders were "worried" that the wave of pro-democracy protests overtaking the Middle East would spread east to China.
"They're trying to stop history, which is a fool's errand," she said. "They cannot do it, but they're going to hold it off as long as possible."

Since February, China has detained hundreds of pro-democracy activists, lawyers and writers and has clamped down on news media reporting on the Middle East protests.

Mrs Clinton's remarks were published as US and Chinese officials held high-level strategic and economic talks in Washington.

At the opening of the meetings on Monday, Mrs Clinton said in a speech that the US remained concerned about the human rights situation in China.

"We know over the long arch of history that societies that work toward respecting human rights are going to be more prosperous, stable, and successful," she told Chinese officials.

"That has certainly been proven time and time again, but most particularly in the last months." Criticism of China's human rights record had been muted at the beginning of the Obama administration but has become increasingly more vocal, our correspondent says.

However, Mrs Clinton said later that the US and China were achieving much greater understanding through regular talks between top officials.

"I do think we are reaching a much better understanding and I think that's one of the principal purposes of the dialogues," she said following the third Strategic and Economic Dialogue between the two countries.
Posted by Joshua Lopez at 1:25 PM