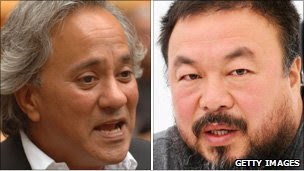 This detention is rather barbaric and what are they doing to him behind closed doors?!

(BBC) Sculptor Anish Kapoor has condemned China's "barbaric" detention of artist Ai Weiwei and has called on galleries to close for a day in protest.
Ai - an outspoken critic of China's human rights record - has not been heard from since he was arrested in Beijing at the start of April.
Kapoor has dedicated his monumental Leviathan art installation in Paris, unveiled on Tuesday, to Ai.
Artists must speak with "a communal voice", he told BBC Radio 4's Today. China says it is investigating Ai, 53 - who was detained at Beijing airport while passing through security checks for a flight to Hong Kong - for as yet unspecified economic crimes.
His sister, Gao Ge, told BBC News she had not heard anything from her brother and had been given no information as to where he was being detained or whether he had been charged with any offence.'Ridiculous situation'
"It's a month now that the poor man has been held without a voice, but not only that, his family doesn't know where he is," said Kapoor.
"This is not a situation that is acceptable in any circumstances. Kapoor, left, has called on the art world to support Ai Weiwei.
"It does bear witness to the barbarity of governments if they're that paranoid that they have to put away artists. It's a ridiculous situation."
Read More@http://www.bbc.co.uk/news/entertainment-arts-13346223
Posted by Joshua Lopez at 1:37 PM