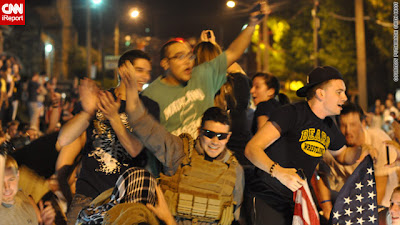 (CNN) -- They learned as children that the world is a scary place where strangers with hatred in their hearts steer planes into buildings, grown-ups cry for days and everything can change in an instant.

They grew up with color-coded terror alerts and long lines at airport metal detectors. They saw the economy sputter. And still, the bad guys appeared to get away with it. Osama bin Laden was their bogeyman, the monster under the bed.
Now the 9/11 generation has come of age. Children who were 8, 9 or 10 when the World Trade Center towers fell and the Pentagon burned are in college. So when the news came that bin Laden was dead, it was young people across the country -- from the campuses of Penn State to American University to Vanderbilt to Stanford --­ who filled the streets with a chorus of cheers, honking horns and fireworks that lasted well into the wee hours of Monday morning.
Check out iReport's Open Story for world reaction
For the 9/11 generation ­-- the label experts give to a subgroup of the millennial generation or generation Net -- it was a celebration of America's renewed strength under a president they helped elect. To them, bin Laden wasn't so much a person as an embodiment of all things scary and evil, said Dr. Patricia Somers, an education professor who has studied college students affected by 9/11.
"They were celebrating a symbol," she told CNN over the phone from her office at the University of Texas in Austin.
http://edition.cnn.com/2011/LIVING/05/04/bin.laden.911.generation.react/index.html
Posted by Joshua Lopez at 10:18 AM