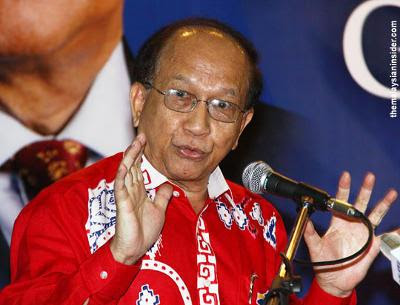 If Implemented, It will be The End Of UMNO & BN! An Absolute Catastrophe!

KUALA LUMPUR, April 26 — The “1Melayu 1Bumi” movement taken up by Perkasa will only get in the way of the 1 Malaysia concept, Information, Communications and Culture Minister Datuk Seri Rais Yatim said today.

“I wouldn’t view that to be a step in the right direction now because the 1 Malaysia concept has done very well and the induction that we have created through various activities have augured well for the concept itself.

“Therefore, it is not beneficial for any other segment to protrude forward and say there should be 1 Bumi, 1 non-Bumi,” he said after the launch of the 1 Malaysia Visibility Programme here at Menara TM.

The Jelebu MP warned that any ideas that will go against the 1 Malaysia notion should not be supported.

“We should not be fast in saying things that will be countering gagasan 1Malaysia. Even Dr Mahathir himself had said that it should not be the epitome idea now. It must be looked forward through the gagasan 1 Malaysia first,” he said.

Malay daily Utusan Malaysia had called on its owners Umno to spearhead a “1Melayu, 1Bumi” movement involving all Malay parties, while claiming that the DAP was intent on toppling the country’s Malay leadership.

Perkasa patron Tun Dr Mahathir Mohamad had spoke out against the idea, and said it would be “disastrous” if it came to fruition.

The elder statesman said such a movement would eventually result in a two-party system, which would be dominated by the Malays and the Chinese on opposing sides of the divide. Despite their patron’s statement, Perkasa has said it would be willing to lead such a “1Melayu, 1 Bumi” movement.

MCA had called for a boycott of Utusan after it proposed the movement to curb Chinese political power in the country.

In response to that, Rais had said that it is “unwise” for MCA to boycott Malay daily Utusan Malaysia as political parties should be open to criticism.

“We will not gain what gagasan 1 Malaysia is going to achieve. We must be brave enough to say this but our bravery must be based on the willingness to admit some of the ill points within our society.

“So we say gagasan 1 Malaysia should be the sole torch towards Malaysia of the future,” he said. Some government leaders had sought to distance themselves from the newspaper’s clarion call last week, claiming the exhortation made in the Umno-owned daily was the personal opinion of the newspaper’s editors.

Prime Minister Datuk Seri Najib Razak then said the Malay-language newspaper will not deter the government’s commitment to his 1 Malaysia brainchild.

“On principle, we should not be racial in our undertone,” Rais said. Rais said 15,400 people were interviewed and 84 per cent said they understood and accept the 1Malaysia concept, although he added that the scope for the database was too small and had asked the interviewers to reach out to the minority segment of the society such as the citizens in Kampung Baru, the Indian community, farmers, and Orang Asli.

“At this level, the gagasan 1 Malaysia is seen as successful. it is the governance principle that is the easiest to sell and reach out to the people without too much problems. The political criticism we can overcome. To the regular citizens, the 1 Malaysia gagasan is successful and we will present a special report to the Cabinet to show a few trends that we have to follow,” he said. He said report will be submitted after a “special preview” with the Department of Special Affairs (JASA) and his ministry.
Posted by Joshua Lopez at 11:29 AM