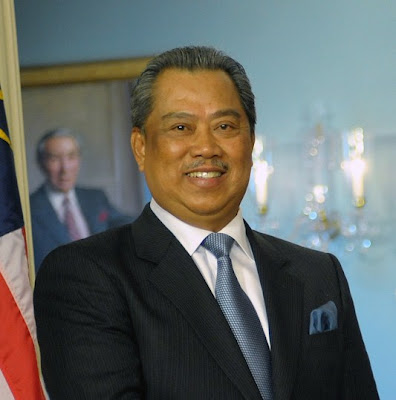 It's Very Sad , Frustrating & Confusing when DPM doesn't seem to stand with PM Najib Razak & This is Not the first time!

Bear in mind all MCA did was to criticize Utusan Melayu, which publishes bigoted articles that is not worth the paper it is printed on.It is becoming so evident that either Najib has absolutely no control over these village idiots or he endorses their brand of racism.

KUALA LUMPUR, April 25 — Deputy Prime Minister Tan Sri Muhyddin Yassin said today that Utusan Malaysia represents the Malays and boycotting the paper will muzzle the community’s voice.
He was responding to calls by the MCA to boycott the Umno-owned newspaper after it called for a “1 Melayu, 1 Bumi” movement.

MCA deputy publicity chief Loh Seng Kok warned that such a movement could lead to apartheid in Malay-majority Malaysia.

Muhyiddin (picture), who is also Umno’s deputy president, said the government could not stop the newspaper from reporting the news.

“It is the voice and desire of the Malay community and also Malaysians in general. If we read Utusan, we can see that there are also reports on other things.

“Just like other media, there are pro and cons. We cannot stop a media from reporting what it wants to report but there is a limit,” he told a press conference.
Utusan had called on its owners Umno to spearhead a “1 Melayu, 1 Bumi” movement involving all Malay parties, claiming that the DAP was intent on toppling the country’s Malay leadership.
Muhyiddin refused to give a clear answer when asked if he supports the “1 Melayu, 1 Bumi” movement.
“That question need not arise because the national spirit of each race still exists without mentioning 1 Malay. If this happens then there would be 1 Chinese, 1 Indian, 1 Punjabi, 1 Mat Salleh, this is not good.

“I am not saying that I like people saying this but it is natural for people to feel this way. But is it good? It is not good. We have to find a better way to address this, not like this,” he said.
Muhyiddin said boycotting Utusan Malaysia could risk muzzling the voice of the Malay community.

“Even if you boycott it will not be effective at all. The more you ask people not to read, the more they want to read. Even the non-Malays have said that there are sensitive reports in the non-Malay media. If we ask why such stories are reported, they will say that they reflect the feelings of the Chinese and Indian communities,” he said.

He added that a newspaper’s role in reporting public opinion must be protected but stressed that reports must be accountable and responsible.

“There is tendency towards racism that cuts across Utusan. This is not good. We should strive to destroy such a feeling and work towards one united Malaysia.
“We cannot stop people from expressing although it does not make others happy. But some Chinese don’t know the feelings of Malays and the Malays know the feelings of the Chinese,” he said.

Muhyiddin also rubbished claims that Utusan’s intention was to destroy the country and create racial tension.

“So we must be rational. Are they (MCA) so worried that Utusan’s article would create chaos. I don’t think so. It is just the expression of a community’s feelings. They are the voice of the Malays,” he said.

Government leaders have sought to distance themselves from the newspaper’s call last week, claiming the exhortation made in the Umno-owned daily was the personal opinion of the newspaper’s editors.

Prime Minister Datuk Seri Najib Razak has said the Malay-language newspaper will not deter the government’s commitment to his 1 Malaysia brainchild.
Perkasa patron Tun Dr Mahathir Mohamad also spoke out against the Utusan idea, saying it would be “disastrous” if it came to fruition.

The elder statesman said such a movement would eventually result in a two-party system, which would be dominated by the Malays and the Chinese on opposing sides of the divide.
Despite its patron’s statement, Perkasa has said it was willing to lead such a “1 Melayu, 1 Bumi” movement.
Posted by Joshua Lopez at 10:53 AM