DPM: My words were twisted 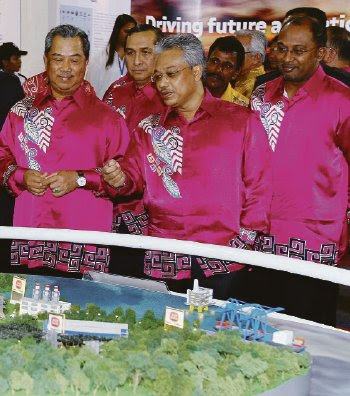 Would the Malaysian Press Be ever so bold to twist the words of our DPM? Mind you, everything said was recorded. The Press would never "play with fire" when it involves top government leaders because they know how "independent" they are in actual fact.
IPOH: Tan Sri Muhyiddin Yassin yesterday slammed two news portals for what he called a twisting of his statement on Utusan Malaysia's proposal of a "1Melayu 1Bumi" plan.

He said even though he had given a lengthy explanation on his stand, the two news portals still managed to come out with inaccurate reports."I gave a lengthy explanation yesterday (Monday), but there were parties that did not report the whole thing. I was made to understand that the alternative media created the impression that I was going against the 1Malaysia concept, as if I was going against Prime Minister Datuk Seri Najib Razak.

"I know full well that I did not make such a statement. Better (for those concerned) to read my whole statement. It is vital that we avoid issues that can jeopardise peace and unity in the country," the deputy prime minister said after closing the Minggu Saham Amanah Malaysia at the Indera Mulia Stadium here yesterday.

Muhyiddin was asked to comment on reports by the news portals, which quoted him as saying Utusan Malaysia represented the Malays and that boycotting the paper would muzzle the community's voice.The Umno deputy president was also quoted by the news portals as saying the government could not stop the paper from reporting the news while rubbishing claims that Utusan's intention was to destroy the country and create racial tension.

"I hold to the same principle as the prime minister. The government's stand on the 1Malaysia concept is clear and while it has been well received by the public, there are still certain quarters that are not satisfied."What's important is that as the government of the day, we hold true to the prime minister's vision. I, for one, am the prime minister's No. 1 fan," he said.On Monday, MCA president Datuk Seri Dr Chua Soi Lek was quoted as saying that Utusan Malaysia does not represent the views of all Malays.

He reiterated that the newspaper's proposal of a "1Melayu 1Bumi" plan, supported by Malay rights group Perkasa, was also not in line with Najib's 1Malaysia concept.The party had also called for the boycott of Utusan Malaysia.
Posted by Joshua Lopez at 9:49 AM