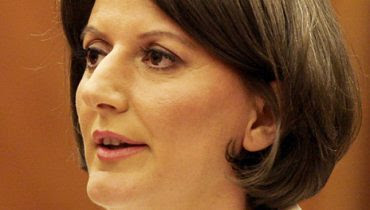 (CNN) -- The first woman to be president of Kosovo took office Thursday after being elected by the Kosovo Assembly in a special session. Atifete Jahjaga, 35, is the former deputy general director of Kosovo police. She received 80 votes in the 120-member Assembly.

Her election follows a ruling by the constitutional court that the process leading to the election of businessman Behgjet Pacolli as president on February 22 was unconstitutional. Opposition members boycotted the session, leaving fewer lawmakers than required by law, it said.

The opposition threatened to repeat the boycott if Pacolli ran again. Jahjaga, who has no political background and is a relative unknown among the Kosovo public, came up as a compromise candidate only Wednesday night in a meeting that included Pacolli, Prime Minister Hashim Thaci and the leader of the main opposition party, Isa Mustafa.

The U.S. ambassador to Kosovo, Christopher Dell, took part as a mediator. At a news conference Wednesday night, Thaci said a memorandum of agreement reached in the meeting calls for formation of a committee to alter the constitution so that the president would be directly elected by the people.

It says a presidential election is to be held six to nine months after the constitutional change takes effect. The agreement also calls for forming a committee to amend election law in time for parliamentary and local elections in 2013. Former President Pacolli's decision to withdraw as a candidate played an important part in ending the crisis, Thaci, Mustafa and Dell said Wednesday night.
Posted by Joshua Lopez at 3:33 AM