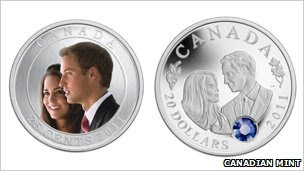 (BBC) The Royal Canadian Mint has unveiled collectors' coins to mark the wedding of Prince William and Kate Middleton. A 20 Canadian dollar silver coin, which will cost about $105 (US$109; £67), has a sapphire-coloured crystal inlay, to symbolise the bride's engagement ring. And a 25-cent coin features a colour portrait of the couple.

Mint chief executive Ian Bennett called the wedding later this month "a priceless opportunity to celebrate Canada's pride in royal tradition". The coins "will give Canadians, royal watchers and collectors everywhere exceptional keepsakes by which to remember this historic event", he said in a statement.

The coins will be sold at Mint shops in Ottawa, Winnipeg and Vancouver, online, and elsewhere. The couple are to marry on 29 April and plan to travel to Canada two months later, on their first official overseas trip as a married couple. They will visit Alberta, the Northwest Territories, Prince Edward Island, Quebec and the capital, Ottawa.
Posted by Joshua Lopez at 10:57 AM