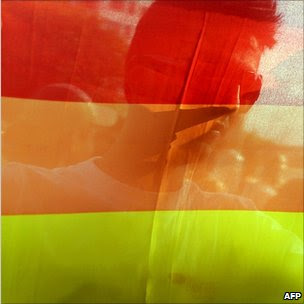 
(BBC) Sixty-six Muslim schoolboys in Malaysia identified by teachers as effeminate have been sent to a special camp for counselling on masculine behaviour.

They are undergoing four days of religious and physical education. An education official said the camp was meant to guide the boys back "to a proper path in life".

Gay rights groups have criticised the measure, saying it promotes homophobia in the Muslim-majority country where gay sex is still illegal.

The schoolboys allegedly displayed "feminine mannerisms" - though educators in the conservative state of Terengganu did not detail what they were, says the BBC's Jennifer Pak in Kuala Lumpur.

State officials say that, if left unchecked, the students - aged between 13 and 17 - could end up gay or transsexual.

The state's education director, Razali Daud, said the students were invited to join the camp and were not compelled to do so.

"As educators, we have to do something about it before the young ones misunderstand people and reach the point of no return," he was quoted as saying by the New Straits Times. Mr Razali says although homosexuals and transvestites exist in Malaysia, the authorities want to limit their number.

Gay sex is illegal in Malaysia and homosexuals say they face discrimination from government policies such as a law that makes sodomy punishable by 20 years in prison. Activists say it is appalling that educators are persecuting children for expressing their personalities and identities.

The Joint Action Group for Gender Equality said "corrective boot camps" violate the rights of people who are perceived as different.

"It should be strongly opposed and challenged as it promotes homophobia and prejudice. "We should send a clear message to institutions that they have no business meddling with an individual's identity and personal preference," the group said in a statement.

A campaigner for sexual rights, Pang Khee Teik, described the camp as outrageous and an example of homophobia.

"All the students will learn from these camps is that they are expected to behave a certain way. "And in order to avoid further ridicule, perhaps they will learn to pretend better. In the end, we are only teaching them how to be a hypocrite," said Mr Pang, co-founder of Seksualiti Merdeka.