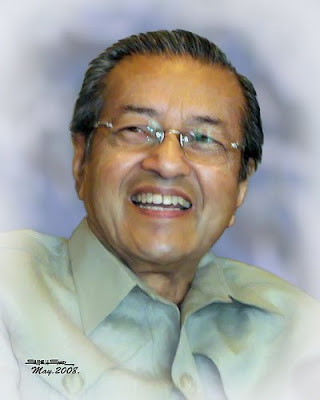 This Vendetta Of Mahathir's will never end as long as he's alive. And this is seriously damaging Malaysia and putting us to International Shame. 13 years since Anwar's sacking, yet still finding him a threat!

Anwar’s sexuality is not the problem and Mahathir knows it. The real scandal is Mahathir’s shameful legacy which we are now facing. We have come to a point where racism and religious intolerance is at its worst.

Mahathir’s tangled web of deceit, corruption and dubious deals with his cronies have brought a once productive country to its knees. Mahathir’s word is not to be trusted and his accusation of Anwar is a tissue of lies. In his autobiography, former Prime minister Mahathir Mohamad said that ex-IGP Abdul Rahim Noor disgraced both him (Mahathir) and Malaysia by assaulting Anwar Ibrahim when he was arrested as the deputy prime minister in 1998.

Mahathir also wrote that Anwar did not deny accusations of sodomy before being sacked as deputy PM. Mahathir also claimed that he had met four girls who told him they had been propositioned for sex, by Anwar. To hide his despicable misrule, Mahathir needed a scapegoat. That person was Anwar. And so Mahathir dragged the country through a prolonged series of fabrications, sham trials and shoddy investigations, wasting time and resources, when both ruling and opposition parties should be working towards moving this country forwards.

If he thought Rahim Noor’s assault brought disgrace, it is nothing compared to the dishonor Mahathir wreaked onto Malaysia. For a start, Mahathir can’t even decide what Anwar’s sexuality is. Mahathir calls Anwar a homosexual.

Then he and his puppets - the police and judiciary – force us to go through the sordid details of sodomy, with stained mattresses and semen stained underwear. Even Tracey Emin the celebrated Brit artist with her unkempt, condom and panties strewn bed would have difficulty keeping up. Next, he claims that Anwar has procured four girls for sex and that the girls were paraded like those in the flesh pots of Patpong, for the client to make his selection.

So is Mahathir also saying that Anwar is bi-sexual? Mahathir is wrong. We, the rakyat are fed up with his tales. We want to move on. We do not wish to get sucked into his pitiful self-loathing stories. Unfortunately, he and his ilk have to perpetuate this persecution of Anwar so that people like him can maintain their grip on us. We understand that if one of their group falls, they will drag the others down. If Anwar triumphs, they all fall. Prime minister Najib Abdul Razak and the BN administration have supped with the devil -Mahathir.

They accepted the loot that Mahathir offered and once they tasted the offerings, they had no choice but to fall in with the masterplan. Mahathir has robbed this country of several hundred billions of dollars. He has cheated the Indian, Chinese, Malay, the Orang Asli and our cousins in East Malaysia. But worse of all, he has robbed each and everyone of us of our dignity. We have no reason to believe that Anwar is homosexual, bisexual or prefers to make out with Martians. We are sorry that he has been dragged through all this and we are disappointed that Najib has continued Mahathir’s legacy.

Anwar has to clear his name but it is an uphill struggle when the neutrality of the police, the investigators and judiciary are compromised. Why should we believe Mahathir when a decade ago, both he and the then IGP Rahim Noor had the temerity to lie to the nation, first by “assuring” us that Anwar was safe and sound in police custody.

Then when Anwar appeared bruised and with a “black eye”, these two had the audacity to suggest that Anwar's injuries were self-inflicted. Two people who were implicated along with Anwar, in 1998, recanted their “confessions” because they had been coerced into pleading guilty. Both Amnesty International and Human Rights Watch expressed doubts about the fairness of the trials which had attracted worldwide condemnation. The first sodomy trial was thrown out. But now Mahathir’s protégé, Najib, has decided to continue the façade.

If Anwar gets to Putrajaya, Mahathir will be crushed in the scramble as his former supporters try to distance themselves from his past misdeeds. Just imagine the broken spirit of the millions of Malays who put Mahathir on a pedestal and thought he was their saviour. Just imagine what it would do to Umno. That is why Anwar must not triumph. Mahathir’s legacy is being put to the test and he wants to stop the real scandal from being exposed. Anwar’s sexuality is not important; it is just a smokescreen to hide Mahathir’s evil.