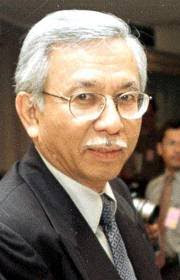 I've always admired this man, off course some bigots out there can criticize him but really this is the Man that salvaged Malaysia everytime we fell into an economic crisis. His Brilliance is simply indispensable! He refused to be brought into government but Dr.M (Then PM) managed to convince Tun Daim to come into Cabinet to help revive the economy. Tun Daim reluctantly came in twice to bounce Malaysia out from an economic turmoil and he did it very well! His Passion For Business remains his forte.

KUALA LUMPUR, March 27 — Pakatan Rakyat (PR) has failed to become a relevant opposition force under the leadership of Datuk Seri Anwar Ibrahim, former Finance Minister Tun Daim Zainuddin said in an interview published today.
He added that the public has come to realise that the former deputy prime minister could not be an effective leader and only talked a good game. “His greatness is only in his ability to give speeches that ignites the spirit and emotions of people even though the contents of the speeches are mere political dreams. Based on this, the public has now lost confidence in Anwar being an effective leader,” he said.
“The general consensus is that Anwar has not shown any extraordinary ability in government. There was no ‘reformasi’ in any ministry he led,” Daim added in the interview published in Mingguan Malaysia, Utusan Malaysia’s Sunday edition, today.
Daim said that Anwar only rose through the ranks in Umno in the 1980s and 90s because then Prime Minister Tun Dr Mahathir Mohamad had given him his full backing. “All this was possible because Tun Dr. Mahathir saw Anwar as the main candidate to replace him when the time came. So the entire machinery of Umno behind the president also moved to support Anwar,” he said.
Daim, who was twice appointed as finance minister by Dr Mahathir, said that Anwar had purposely engineered his image as “the Fall Guy” when he was sacked in 1998 following accusations of sodomy and corruption.
He added that PR was nothing more than a political conspiracy between parties that could not see eye-to-eye.
“This coalition cannot reach any agreement on important matters of national interest as they all hold firmly to their respective principles,” he said.
He called DAP a Chinese chauvinist party while PAS used Islam as a political mask to cloud the eyes of rural Malays and PKR only existed because of and for its de facto leader Anwar. Daim explained that in a democracy, an opposition was needed as a check and balance but PR only opposed for the sake of opposing, rejecting government efforts that benefited the country. “A relevant opposition provides a check and balance and is not chauvinistic with tunnel vision so it can unite multiethnic Malaysia. country.
“The opposition parties have not lost direction only that they all have their own direction. They are a marriage of convenience,” he said, adding that PR had yet to present its shadow Cabinet. Daim, had in late 2007, predicted that Penang, Selangor and Kedah would join Kelantan as opposition-held states after the 2008 election.
This prediction came true as BN lost the four states and also Perak as it ceded its customary two-thirds of Parliament in the landmark election.
Daim also said in the interview today that BN would remain in power after the next general election as it could not do any worse than 2008.
Posted by Joshua Lopez at 10:11 AM