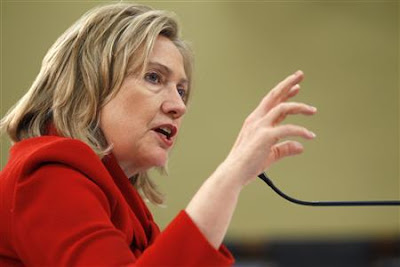 Secretary of State Hillary Clinton gestures as she testifies before the House Appropriations Committee State, Foreign Operations, and Related Programs Subcommittee hearing on the budget for the State Department on Capitol Hill in Washington, March 10, 2011.

By Andrew Quinn
WASHINGTON Thu Mar 10, 2011 5:19pm EST
WASHINGTON (Reuters) - Secretary of State Hillary Clinton said on Thursday she plans to meet representatives of Libya's opposition groups but warned against unilateral U.S. action over the crisis, saying it could have unintended consequences.
Clinton met Tripoli's former ambassador to Washington, who has joined a growing number of Libyan diplomats who have denounced leader Muammar Gaddafi, and said she would meet more opposition figures during a trip next week to France, Egypt and Tunisia.
"We are in direct contact with members of the opposition, here in the United States, in Libya, in other countries, and we are working with them to determine what assistance they are actually able to use," Clinton told reporters after meeting Chile's foreign minister.
While saying she recognized the urgency of the situation, Clinton said calls for a quick U.S.-led military response to the crisis were premature -- underscoring that a no-fly zone and any other moves would require international support.
"Absent international authorization, the United States acting alone would be stepping into a situation whose consequences are unforeseeable," Clinton told a congressional hearing, stressing that NATO and the United Nations should take the lead in planning the next steps.
Clinton said the United States was focusing on humanitarian relief and building links to Libya's opposition groups, which are largely unknown in Washington.
She met Libya's former ambassador Ali Aujali, who now says he speaks for the opposition, and said the United States would accept no future envoys from Gaddafi as he engages in an increasingly brutal effort to put down the rebellion.
"We are suspending our relationships with the existing Libyan Embassy, so we expect them to end operations as the embassy of Libya," she said.
She did not specify which other opposition representatives she planned to meet.
CAUTIOUS ON NEXT STEPS
Clinton said the United States and its NATO allies were actively planning for options on Libya. NATO said on Thursday it would move ships closer to Libya but that a no-fly zone would take more planning.
"Trying to plan is the first and most important undertaking and there is an enormous amount of planning going on. But it's very challenging and I think we ought to have our eyes open as we look at what is being bandied about, and what is possible, in order to make good decisions," she said.
Clinton stressed the United States would consider "every option imaginable" for the next steps but suggested the proposed a no-fly zone, which has been backed by several prominent U.S. lawmakers, may not be the best one.
"I want to remind people that we had a no-fly zone over Iraq. It did not prevent Saddam Hussein from slaughtering people on the ground and it did not get him out of office," Clinton said. "We had a no-fly zone and then we had 78 days of bombing in Serbia. It did not get Milosevic out of office. It did not get him out of Kosovo until we put troops on the ground with our allies," she added. "I really want people to understand what we are looking at."
"I can assure you that the president is not going to make any decision without a great deal of careful thought and deliberation."
Gaddafi makes threats and ignores diplomatic moves
Posted by Joshua Lopez at 2:09 PM