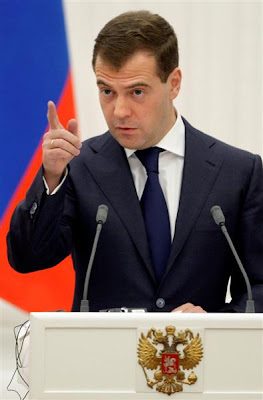 Well Said Mr.President but Boy! It's going to be a hell of a ride with Putin!

(BBC) Russia's President Dmitry Medvedev has announced that by mid-2011 he wants government ministers to give up their seats on boards of directors. The proposal is being seen as a potential blow to a close ally of Prime Minister Vladimir Putin, Igor Sechin. Mr Sechin is chairman of state oil firm Rosneft and, as deputy prime minister, regulates the gas and oil industries.

The president said he wanted to end "the excessive influence of state companies on the investment climate". Mr Medvedev told a meeting of his modernisation commission in the city of Magnitogorsk that corruption remained a factor, in a speech broadcast live by state news channel Rossiya 24. He said that he himself had served as chairman of the board of directors of Russia's state gas monopoly, Gazprom.

While it may have made "good sense" at the time, the president said, it would not be suitable today, with the state trying to regulate everything through its own representatives. "It never worked in any country, and it won't work in ours," he said. All ministers should vacate their seats and be replaced by independent figures, he added.

Officials said later that VTB bank and Rosneft were both examples of where government ministers would be replaced at shareholders' meetings in June. Finance Minister Alexei Kudrin is currently on the board of VTB, and Gazprom still has two ministers and a deputy prime minister serving in its boardroom. But it is the perceived blow to Igor Sechin that is likely to reinvigorate talk of a rift between the president and Vladimir Putin.
Posted by Joshua Lopez at 11:48 AM