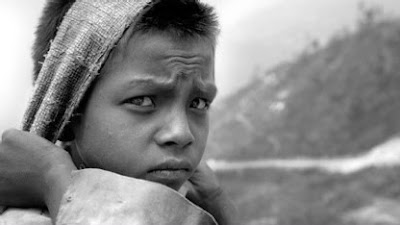 The boys' choir from Zambia sang in churches, schools and shopping malls across the United States. In exchange for their hard work, the boys were promised an education, wages that could be sent home to family and a school that would be built in Africa.

People who heard the 12-member a cappella choir were touched. They reached into their wallets and purses and offered up donations. The boys, ranging in age from 12 to 17, sang a mixture of gospels in English and their native tongue. They brought in more than $1 million, yet saw little of it. They received room and board and the occasional token payment, but no wages, no education, no school back home.

The boys are among the faces of modern-day slavery - in their case, trafficked into the United States under the guise of a faith-based organization that preyed on them.

"They were brought here for a specific purpose and that was to get as much out of them - with no regard for them or their futures," says Sal Orrantia, a U.S. immigration agent who worked the case.

The number of people ensnared in modern-day slavery ranges from 12 million, according to the United Nations, to 27 million, according to leading anti-slavery activists like Kevin Bales. Another prominent activist, Siddharth Kara of Harvard, estimates the number could be as high as 30 million. The broad range is the result of challenges associated with tracking a practice hidden in shadows and finding a consensus on how best to define and measure it.

Experts agree the vast majority of slaves today live in Asia and the Pacific, where they are held against their will as a result of debt bondage in agriculture and domestic work. Millions of others across the globe are used for sexual exploitation.

"To me, slavery means one person who is completely under the control of another person, that they use violence to maintain that control, they exploit them, make money out of them and that the [victim] just can't walk away," says Bales.

"Those are the fundamental criteria really for what slavery has always been about throughout all of human history." Bales heads Free the Slaves, an organization that works to liberate exploited men, women and children across the globe and make sure they remain free.

"Our ultimate goal is the end of slavery on planet Earth. We really believe that's possible," Bales says. He says modern-day slavery must be attacked on four fronts - politics, business, religion and society - for it to be eradicated. He compares the current fight to the global determination to eradicate small pox decades ago.

Today's slavery differs greatly from the trans-Atlantic slave trade, when from 1501 to 1867 an estimated 12.5 million Africans were shipped to the Americas. Back then, slave owners were typically prominent members of society, and a massive economic system was based on the global institution of slavery.

Today, enslavers are mostly shadowy figures lurking in the fringes. "Slavery has been pushed to the very edge of society," says Bales. "It's really standing on the brink of its own extinction. And if we understand that and get together and give it one really hard boot, we can kick it over the edge into extinction."

Bales' mission began more than a decade ago when he first met a young woman named Seba in Paris. At age 9, Seba was taken from her home in Mali by a family friend, who promised the girl a better life in France. Seba cooked for the friend's family, looked after her children – and was often punished with beatings.

"Once in 1992, I was late going to get the children from school; my mistress and her husband were furious with me and beat [me] and then threw me out on the street," Seba told Bales in his 1999 best-seller, "Disposable People."

"I had nowhere to go; I didn't understand anything, and I wandered the streets. After some time, her husband found me and took me back to their house. There they stripped me naked, tied my hands behind my back, and began to whip me with a wire attached to a broomstick." Seba was freed when a neighbor heard her screams and called police. She had been held for so long she didn't know her age when she was freed.

Across the globe, the stories of modern-day slavery bear a similar theme. In Ghana, a 9-year-old boy hauls heavy equipment from boat to shore in a fishing village under the midday sun. At the end of a long, hot day, sometimes he'll only get a beating.

In Haiti, a group of teens stand frightened just before they're raped - initiation into forced prostitution. The ring is run by criminals in Port-au-Prince's notorious Cite Soleil slum, a trade that survived last year's massive earthquake and continues to thrive.

And in Texas, the voices of the Zambia Acappella Boys Choir were used to profit their captor, a Christian missionary who recruited the boys from Africa and brought them to the U.S. in the late 1990s.

The missionary, Keith Grimes, ran a faith-based group called TTT: Partners in Education. The federal government began investigating in 1998 after church members in Texas filed complaints raising concern about the treatment of the boys.

When Grimes died of natural causes, the investigation ended. In 2001, the U.S. Department of Labor ruled that Grimes' group was liable for nearly $1 million in back wages and civil penalties for the members of the choir. To date, none of the boys has received any of the money because Grimes died and his company was bankrupt.

Across the globe, dozens of organizations like Bales' work with governments and groups on the front lines to crack down on slavery. In northern India, a rehabilitation center called Bal Vikas Ashram helps children ages 8 to 14 recover from enslavement by carpet loom owners. It also helps organize raids on slave owners. In the last year, the group helped free 111 children. In the Democratic Republic of Congo, human rights groups work to free slaves being used by warring factions in mines rich in gold and other metals. In some cases, villagers are snatched at gunpoint and forced to work; other times, women and girls are forced into the sex trade around the mines.

In the United States, groups work with women and girls to recover from the trauma of forced prostitution, where they are raped and held against their will by pimps. Shamere McKenzie says she became enslaved at 19. She needed $3,000 for college and met a young man on the campus of St. John's University in New York who said he could help. He turned out to be a pimp who kept her captive for a year and a half.

"When I told him I didn't want to do this anymore, I remember being choked until I peed on myself," McKenzie says. "I was just choked, beaten up, thrown on the floor and beaten. "A lot of people asked why did I do it for so long if it was something I didn't want to do. But being in a situation like that, you're controlled by fear."

She says her pimp had anywhere from three to 12 women and girls under his control at any time. On a typical day, McKenzie says she would wake up around 9 a.m., be sent to a strip club around noon and work the streets until 7 p.m. She and the others would then sleep until 10 p.m. before being sent back out. McKenzie tried to run away three times, but her pimp would threaten to kill her and harm her family. "All the girls were afraid of him."

McKenzie's prostitution ended when police stopped the car she was driving. Her pimp and other prostitutes were in the car, including a 12-year-old girl. Even though she was being held against her will, she was charged with transferring a minor across state lines and convicted. The pimp was convicted as well.

Tina Frundt is now helping McKenzie in her recovery. Frundt is the founder of Courtney's House, a Washington, D.C.-based nonprofit group that helps women and girls who have been exploited by the sex trade. Frundt says she was forced into prostitution at age 13 in Cleveland, Ohio. Since Courtney's House began in 2008, the organization has helped 500 victims escape sex trafficking. The average age of girls being forced into slavery in the U.S., Frundt says, is between 11 and 14.

"In the U.S., we commercialize forced prostitution and pimping - we glamorize it with 'pimp this' and 'pimp that,'" she says. "And so, of course, we make it look like it's a choice. ... And overseas we make it look sad and that these girls are forced in.

"Being raped, held hostage, tied up is not something that you choose to do," she says. "How did I get out? Unfortunately, it's how many of our kids get out. I ran to the police and they arrested me."

Even though she was a child, she spent the next year in juvenile detention because prostitution is illegal. Her pimp remained at large, Frundt says. It's an all-too-common theme for those combating human trafficking.

"These are people, whether they're from another country or whether they're enslaved at home … who have been trapped in a situation that they can't get out of," says Luis CdeBaca, who heads the State Department's Office to Monitor and Combat Trafficking in Persons, an office created in 2000.

CdeBaca, an ambassador-at-large, was appointed by President Obama in 2009 to coordinate U.S. government activities to bring an end to modern-day slavery.
He says traffickers prey on the vulnerabilities of the victims - who many times are seeking a better life - and "they pervert it."

"Instead of being the opportunity that the victims want, it becomes the trap," says CdeBaca. "One of the things that's horrible about the human trafficking situation in the 21st century is that you can sell a person over and over and over."

He says governments must better train law enforcement about the proliferation of human trafficking, and that non-government organizations must continue pushing governments to do more.

"If you don't have a cultural impact where people have decided together to say 'no' to modern slavery, there's no reason why law enforcement should be out there doing this on their own," he says. "It really starts when the cultures change."
Posted by Joshua Lopez at 11:06 AM