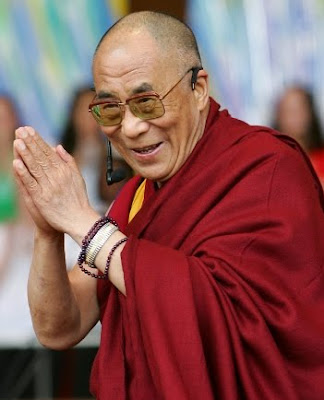 He has done His Part Very Well and I guess He sees the need of New Blood...

The Dalai Lama announced Thursday his plan to retire as political head of the exiled Tibetan movement, saying the time had come for his replacement by a "freely elected" leader.

The Dalai Lama, whose more significant role is as the movement's spiritual leader, said he would seek an amendment allowing him to resign his political office when the exiled Tibetan parliament meets next week.

"My desire to devolve authority has nothing to do with a wish to shirk responsibility," he said in an address in Dharamshala, the seat of the Tibetan government-in-exile in northern India. "It is to benefit Tibetans in the long run. It is not because I feel disheartened," he added.

The Dalai Lama was just 15 when he was appointed "head of state" in 1950 after Chinese troops moved into Tibet. He fled his homeland in 1959 after a failed uprising against Chinese rule.

The 75-year-old Nobel Peace Prize winner has long talked of stepping down from what is a largely ceremonial role, while maintaining his more important position as the spiritual figurehead of the Tibetan movement.

"As early as the 1960s, I have repeatedly stressed that Tibetans need a leader, elected freely by the Tibetan people, to whom I can devolve power," he said.

"Now, we have clearly reached the time to put this into effect." In his address marking the anniversary of the 1959 uprising, the Dalai Lama made it clear that he would not be withdrawing from the political struggle and remained "committed to playing my part in the just cause of Tibet."

Despite his advancing age and several health scares, the Dalai Lama maintains a punishing travel schedule as the global face of the Tibetan struggle.

Spiritual and secular loyalty to his leadership is steadfast and he is the adhesive that binds together the various factions within the movement, some of whom favour a more radical agenda than the Dalai Lama's non-violent campaign for autonomy within the Chinese state.

In Thursday's speech, the Dalai Lama said he had received "repeated and earnest" appeals from inside and outside Tibet to provide continued political leadership.

"In contrast to those long-serving autocrats who have been much in the news, the Dalai Lama is the rare visionary who is willingly divesting power to his people," said ICT president Mary Beth Markey.

"His decision, based on the maturation of Tibetan democracy in exile, deserves both accolades and support," she added. -Yahoo News.
Posted by Joshua Lopez at 10:57 AM