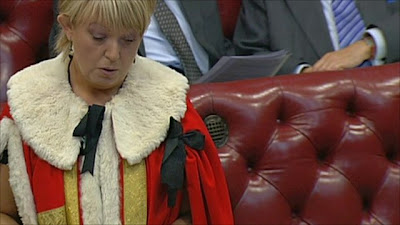 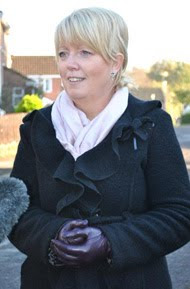 She holds on to her fight with astounding strength despite suffering a very sad and painful tragedy...

(BBC) The government's "communities champion" says residents should be able to set the speed limit on local roads. In a report on tackling neighbourhood crime, Baroness Newlove suggests volunteers should be given speed guns.
The peer, whose husband Garry was murdered by a gang of teenagers in 2007 in Warrington, said crime should not be seen as someone else's problem. Ministers say the report will help to shape their approach to community activism in England and Wales.
Garry Newlove was attacked and suffered fatal brain damage after spending months trying to stop trouble-making youths from vandalising his neighbourhood. His widow Helen, who carried on his campaign, was made a peer by Prime Minister David Cameron shortly after the 2010 General Election.
Ministers asked her to visit community activism projects around the UK, gather ideas via a blog and to report back to ministers about what would work in making neighbourhoods safer.
In her report, the peer argues that communities can take more responsibility for dealing with anti-social behaviour and crime and become less reliant on agencies such as the police. Two of her proposals involve communities getting rewards for doing more to tackle crime.
In the first, called "Bling Back", the proceeds of assets seized from a drug dealer would go directly to the community that provided information leading to their conviction. She also proposes a form of "community reward" to be spent on crime prevention work where local people have helped to secure a conviction. Council tax rebates On speeding, Lady Newlove suggests volunteers could be given speed guns to help police enforce the limit. She says it already happens in Cambridgeshire and Devon and Cornwall.
People who take part in community activism should get a council tax rebate or vouchers to spend on local services, she says. "For too long now, too many people have either not known how to get involved, have not been listened to when they have tried to speak out, or simply felt that it wasn't worth it as nothing would ever change," she said.
"This report sets out how we can change things by empowering local communities to reclaim their streets. "Everyone has a role to play, communities must begin to take more responsibility and local agencies must begin to lessen their grip on the decision-making process and trust the people they serve to solve problems for themselves."
Baroness Newlove said she believed there was a big appetite among residents for volunteering to improve their neighbourhoods. James Brokenshire, Minister for Crime Prevention, said: "Since her appointment, Baroness Newlove has been working tirelessly to inspire, challenge, support and learn from areas across the country. "I look forward to seeing how her report will help to shape how we approach community activism in the future."
Posted by Joshua Lopez at 11:14 AM