Arab Rulers & People Disappointed With US 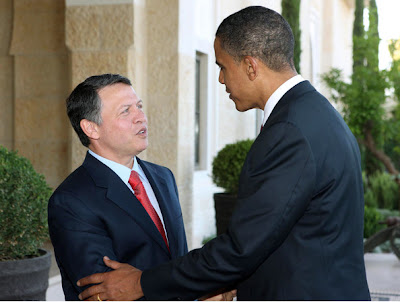 I wander what His Majesty King Abdullah Of Jordan has to say about this but really i feel that the US has been playing a very passive role rather than protecting the Arab Nations.The Arab Nations need America at this time of democratic reform. The US on the other hand may be faced with setbacks, the view from their seats may look very different and complex.

Chas Freeman was U.S. ambassador to Saudi Arabia from 1989-1992, serving during Operation Desert Storm. He was also the president of the Middle East Policy Council. In a phone conversation, Freeman paints a very gloomy portrait of how the Arab Street and longtime rulers are responding to America’s actions in the region.
“The most recent set of revolutions has proven, not just to Saudi Arabia but to other emirates and monarchies in the Gulf region, that the U.S. is a faithless friend and cannot be relied upon as a protector. The relationship with U.S. was premised on the thought that the U.S. would protect them from foreign and domestic enemies. That has been disproven.
Ironically, the Arab Street - having seen a tardy, ineffectual response to their demands for the ouster of Ben Ali in Tunisia and then Mubarak in Cairo - have drawn the same conclusion: that the United States is an unreliable supporter of democracy and will cynically go with the flow. The irony is that both those who made the revolutions and those who oppose them have lost faith in the United States.
After the Arab League asked for a no-fly zone to be imposed in Libya, the United States belatedly responded. The net effect of this has been to remind Arabs generally of the apparent American indifference to Arab death and the violence of American foreign policy. Something which should have been an affirmation of solidarity has become - due to the delay in its implementation - something much less and maybe even a further point of difference.” And how about the U.S.-Saudi relationship?
“There is a serious disagreement between Riyadh and Washington about Bahrain. The United States has responded to the unrest in Bahrain by [calling for] concessions and reform. The Saudis believe that appeasement of mobs simply feeds their frenzy. …
I believe the Saudis fully understand that the injustices and discrimination in Bahrain have many times in the past boiled over in unrest. This is not the first instance, but it is the most dramatic. They understand the status quo is not sustainable. GCC [Gulf Cooperation Council] intervention to restore order will be followed by quiet GCC intervention to promote peaceful change in Bahrain. …
But by intervening they have arguably given Iran a reason for counter-intervention - meaning support to protect the mainly Shiite demonstrators. They have also stimulated the Iraqi government, under pro-Iranian Shiite leadership, to make common cause with Iran. An alliance between Iraq and Iran is the last thing on Earth that the Gulf states want.” Is Saudi Arabia stable?
“Saudi Arabia is quite different from other Arab countries in that its system is entirely home-grown and legitimate. Saudi Arabia has never compromised its independence by accepting the dictates of foreign protectors. Its policies, by and large, have strong popular support, and its king is regarded as a reformer. The question is: Is he reforming too slowly or too fast?” Post by: CNN's Amar C. Bakshi
Posted by Joshua Lopez at 11:15 AM