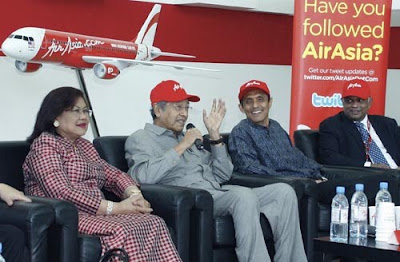 Describing her appointment as one that would not just revolve around attending board meetings without knowing the directions of the company, Rafidah said she would be able to contribute much to the team.

“We are still awaiting approvals for several routes that we have applied for such as Sydney and Jeddah,” she told reporters here after welcoming former Prime Minister Tun Dr Mahathir Mohamad who visited AirAsia’s office and academy here yesterday.

Rafidah said these routes were important for the country, as they could, besides being a link, bring in foreign investors and tourists from overseas. “An economic spin-off would take place with the routes. “Not only in terms of tourists expenditure but also the promotion of Malaysian products such as its services, hotels, transportation and so on.”

Business communities that give importance to low costs will definitely be attracted to using the services of AirAsia when having to travel to the country regularly before deciding on opening up their factory or investing here, she said.

“Not all investors go on first class. You can imagine how many people will come to realise the economic opportunities in Malaysia.” Indeed, AirAsia will make Malaysia the hub for the transit of tourists travelling in the region, said Rafidah who replaces Datuk Kamaruddin Meranun.

“Certainly the new routes will not become profitable and productive overnight but we can build them if we know that there is a market and demand."

“This will be first agenda because we know there is huge potential,” she said.

The former Minister of International Trade and Industry said she took two weeks to decide on the offer made to her to take on the post in AirAsia X.

“I was attracted when offered to be the chairman of AirAsia X."

“Before making the decision, the management gave me a full briefing and I also visited AirAsia."

“I was impressed with the management style and business model and the measures taken to develop Airasia and AirAsia X."

“Only after this, did I decide to take on the position.” Rafidah said this was the second posting she had taken up after becoming aboard member of one of the subsidiary companies of Johor Corp two years ago. — Bernama
Posted by Joshua Lopez at 10:40 AM