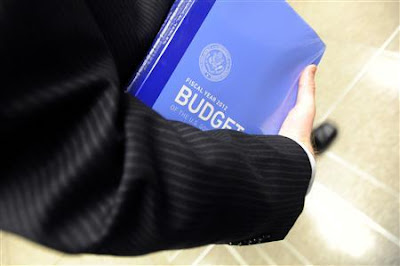 (Reuters) - President Barack Obama on Monday pledged to halve the U.S. deficit by 2013 and axe $1.1 trillion over a decade through spending cuts and tax increases in a budget he called a "downpayment" on fiscal control.

But Republicans, who accuse Obama of being a tax-and-spend Democrat, said the president had not gone far enough in curbing costs.

They aim to make the 2012 presidential election a referendum on his fiscal track record and threaten fights over a legal limit on the U.S. debt and how to fund the government in the short-term.

Obama said his plan was a balance between deficit reduction pain and investment for growth. It only provided a general guide on how to tackle entitlement outlays that include the Social Security and Medicare programs responsible for huge government spending.

"What we have done here is make a downpayment, but there is going to be more work that needs to be done and it's going to require Democrats and Republicans coming together to make it happen," he said at a school in nearby Maryland.

The budget calls for investments in areas such as high-speed rail, broadband Internet, and energy efficiency research. It makes cuts to programs that provide heating help for poor people and grants to big airports, for example.

This trend would trim the deficit as a share of the U.S. economy to 3.2 percent by 2015 from 10.9 percent this year and meet a pledge Obama made to his Group of 20 partners to halve the deficit by 2013 compared to its size when he entered the White House in January, 2009.

The news was well-timed, with G20 finance ministers meeting in Paris on Friday and Saturday. Two-thirds of the $1.1 trillion in savings come from spending cuts. The rest comes from higher revenues as U.S. growth steadily picks up pace and from tax increases. The president is seeking an additional $328 billion through a variety of measures, including ending tax breaks for big business on income earned abroad.

Standard & Poor's Chief Economist David Wyss said the budget was a "step in the right direction" but more was needed to be done in order to tackle entitlement spending. He did not comment on the U.S. debt rating. A recent S&P report said a U.S. stable rating outlook assumes the government will "soon reveal a credible plan ... to enable the general government debt-to-GDP ratio to stabilize and then to decline." A ratings downgrade would likely push up U.S. borrowing costs.

Obama's budget for fiscal 2012 is a proposal to Congress and months of wrangling will now follow with Republicans, who control the House of Representatives and increased their seats in the Senate after November elections. They campaigned on deep cuts in federal spending. "Congress often goes in a different direction," said Michael Moran, chief economist at Daiwa Securities America in New York, who was also disappointed there was not more from the president on tackling entitlements.