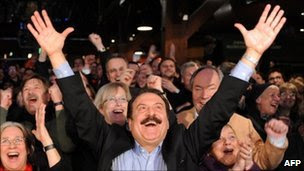 This leaves her position and the furture of her party at question.
(BBC) German Chancellor Angela Merkel's governing Christian Democrats have suffered a heavy defeat in a regional election in the city of Hamburg.
Preliminary results gave her party 22% of the vote, compared with 48% for the opposition Social Democrats. The city's outgoing Mayor, Christoph Ahlhaus, said it had been a painful day. The result means the Christian Democrats lose three more seats in the upper house of the German parliament. This makes it more difficult for them to pass legislation.
BBC Berlin correspondent Stephen Evans says the slump in fortunes of Ms Merkel's CDU party in Hamburg indicates a rough road to the federal elections in 2013 - and it might also make it harder to keep her ruling coalition together before then.
He says there are local factors behind the result, but her party may also be suffering a backlash from the recession. The economy is now growing fast but only after a steep decline.
A similar regional election is due to take place in Baden-Wuerttemberg - a CDU stronghold - in March.
Posted by Joshua Lopez at 12:47 PM