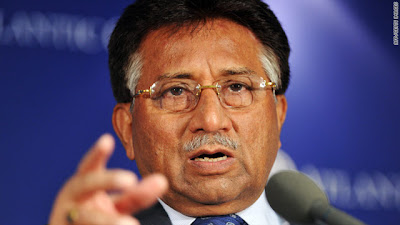 It Doesn't Take Rocket Science to suggest that Musharraf Murdered Bhutto! I Say Hang The Man!

(CNN) -- A court in Pakistan issued an arrest warrant Saturday for former Pakistani President Pervez Musharraf in connection with the assassination of former Prime Minister Benazir Bhutto, a public prosecutor told CNN.
Chaudhry Zulfiqar Ali said on the Anti Terrorist Court in Rawalpindi issued the warrant.
Prosecutors claim that an investigation shows Musharraf was responsible for not providing adequate protection for Bhutto and has not responded to a prosecutor's request to answer questions -- hence the court-ordered arrest warrant.
Bhutto, who spent many years in exile, was assassinated in 2007 as she campaigned against Musharraf for the presidency.
Some have accused Musharraf of being involved in the assassination, but Musharraf denies any involvement. Late last year, Pakistani authorities arrested two police officials in the case.
A United Nations panel looking into Bhutto's assassination concluded that Pakistan's military-led former government failed to adequately protect her and that intelligence agencies hindered the subsequent investigation.
The panel's scathing report in April 2010 said the suicide bombing that killed Bhutto "could have been prevented" and that police deliberately failed to pursue an effective investigation into the killings. But Musharraf's government has said Bhutto had been afforded adequate protection.
Musharraf's legal adviser told CNN that Musharraf has not appeared before the court because the accusations against him are baseless and politically motivated.
"This is political victimization against Musharraf," Muhammad Ali Saif said. "Musharraf was never contacted by investigators to get his version of the assassination." Musharraf went into self-imposed exile in London after resigning in 2008.
Musharraf decided to start a political party last year and make a comeback. He has said he wants to return for a presidential run in 2013 because he sees suffering in Pakistan and doesn't see a political party offering a solution.
Posted by Joshua Lopez at 8:16 AM