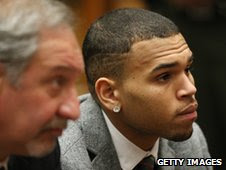 There exist many animals like this one around the world and so much more has to be done to prevent such animals from victimising the physically powerless!
(BBC) A restraining order given to Chris Brown after he assaulted ex-girlfriend Rihanna has been relaxed.
A judge in Los Angeles has ordered the R&B star to stay 10 yards (nine metres) away from the singer at music industry events.
That's down from 50 yards (45 metres) after he pleaded guilty to assaulting Rihanna before the Grammy music awards in February 2009.
He was given community service and had to go to domestic violence counselling. Superior Court Judge Patricia Schnegg's ruling came after an attorney for Rihanna said she didn't object to the removal of part of the restraining order.
It means the stars can now speak to each other and it would be possible for the pair to appear on stage together. The judge praised 21-year-old Brown and said that he was continuing to make progress in completing the physical labour requirements of his probation.
Buit he was warned that Rihanna can record any threatening conversations she has with him and present them as evidence to the court. Brown faces another progress report hearing on 22 June. As well as community service, physical labour and counselling the singer was fined $2,500 (£1,541).
Chris Brown was arrested on 8 February 2009 after the attack in the Hancock Park area of Los Angeles. Rihanna was forced to pull out of the Grammys after the assault. Brown's court order remains in effect until August 2014 when his probation is scheduled to end.
If the R&B star harasses, threatens, assaults or tracks his ex-girlfriend's movements, he could be found to be in violation of his probation.
Posted by Joshua Lopez at 12:29 PM