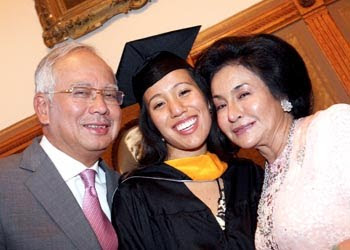 Congratulations Nooryana Najwa Najib Razak! many Malays Should learn from you and your family to aim for academic and personal success rather than scheming, plotting, accusing, holding bitterness, anger and bitching!

Go Girl! Aim for the sky, follow the footsteps of your parents, obtain your Masters and PhD and why not aim to be Malaysia's First Female Prime Minister? It's About Time!

WASHINGTON - Malaysian Prime Minister Datuk Seri Najib Tun Razak and Datin Seri Rosmah Mansor were proud parents today as they watched their daughter Nooryana Najwa accept her scroll at Georgetown University.They sat together with hundreds of other parents and relatives and witnessed Nooryana, 22, receive her Bachelor of Science in Foreign Service degree after a four-year course of study at the School of Foreign Service of the 222-year-old university.

Najib and Rosmah are in the United States from May 17 as part of the prime minister's working visit to New York and Washington."I am very grateful that my daughter has obtained her first degree from the Georgetown School of Foreign Service.

I feel I have fulfilled my responsibility as a father and my daughter has garnered education in the field of her choice," Najib said following the convocation at the Healy Lawn of the university.Also present at the event were their son, Nor Ashman, and the Malaysian Ambassador to the United States, Datuk Seri Dr Jamaludin Jarjis.

Najib said the global experience and quality curriculum at the university would enable his daughter to face life's challenges well because the curriculum at the School of Foreign Service was suitable in the era of globalisation as students had to learn, among other things, a modern language in four years.

Asked what Nooryana intended to do, Najib said his daughter wanted to garner some working experience before pursuing her Masters degree.Rosmah also said she was grateful that her daughter had successfully completed her studies at a world-renowned university."The sacrifices of my daughter and mine, as the mother, have borne fruit.

I kept in constant contact with her to monitor the progress of her studies in between my responsibilities as the wife of the nation's leader," she said.Rosmah said she made sure that she made time to monitor the progress of her daughter's studies even though she was busy with many programmes and responsibilities as the president and patron of various non-governmental and welfare bodies."I had to divide the time. I should practise what I preach. I hope parents will monitor the studies of their children so that they succeed and become useful citizens of the country," she said.-- BERNAMA
Posted by Joshua Lopez at 1:35 PM