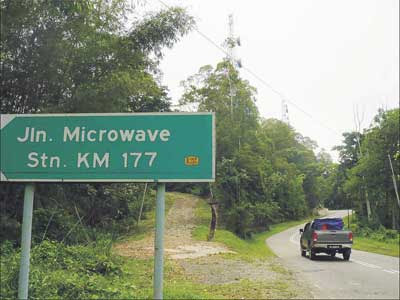 (The Star) MOTORISTS driving along the lonely 350km stretch of road between Kota Kinabalu and Sandakan can always count on a roadsign to perk them up: Jalan Microwave Station at Km177. The blue Public Works Department signage is a landmark for some and a conversation piece for others.It is also common for motorists on holiday to get out of their cars to take a photograph next to the sign, which is in the Telupid subdistrict.

So, is there a shop selling microwave ovens nearby? Is the area well-known for its microwaved delicacies?

Are passers-by in danger of being microwaved? So unique is the name that the road has emerged in some international web forums on discussions about "strange road names", along with Ragged Ass Road in Canada and ScratchyBottom in Britain.

It doesn't matter to minibus driver Jalil Jakaria. Jalil, who shuttles between Sandakan and Kota Kinabalu almost daily, said the sign served to tell him that he was halfway to his destination."It is a welcome sight. I get less groggy when I see it and will perk up because this is the stretch where it gets boring. "The road is winding and undulating, and there are not many houses. It can get lonely and boring, especially at night," Jalil said.

Tour guide Ben Angkee said apart from the name, it was just a normal signboard. He said many tourists asked to get down to snap photographs.In fact, there is another with a similar name near Beluran and there are other quirky road names, too, like Jalan TV Station in Kota Marudu."I think Jalan Microwave Station is named such because it leads to communication towers."He is not far off the mark.

A spokesman for the PWD said the road was named that way because of a transmission tower built on a nearby hill more than 20 years ago."It was built by Telekom (Malaysia) and it uses microwave signals. These days, the towers serve a different function but the name remains."Indeed, a number of roads in Sabah are named after what it the road leads to, such as Jalan Ke Tangki Air at Donggongon.The PWD officer said there were no hard and fast rules where the naming of roads in the state was concerned."It is based on the locality of the road and, in this case, it was the tower."Once a name is gazetted by the department, it will be registered with the Finance Ministry and with the Land and Survey Department to be recorded as road reserve."The officer said: "After the process is completed, the road is deemed reliable and should be open to the public at all times. "It can be closed only during emergencies.
Posted by Joshua Lopez at 9:43 AM