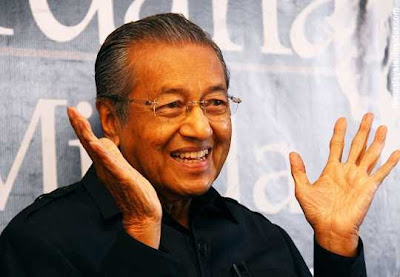 It's Too Late Dr.M! Your Party Is Down The Gutter!

March 28 — Umno must not continue blocking the entry of professionals and academics into the party as this has led to the current lack of talented leaders, Tun Dr Mahathir Mohamad said today. “For decades, Umno has ‘not allowed’ the smart ones to join the party. That is why many doctors have joined PAS,” the former prime minister was quoted as saying by Bernama Online.

“This ultimately makes it difficult for Umno to find suitable candidates in ensuring victory in the elections,” he added.

Dr Mahathir also urged the party to consider fielding outsiders in the coming general election, saying it should abandon the practice of only picking divisional leaders to contest.
“We should accept good candidates, whether they are Umno members or not,” he said.

Acknowledging that the reluctance to admit the professional class had been prevalent even during his time, the country’s longest-serving prime minister told the party it could no longer afford to restrict membership to the usual quality of entrants.

“We want talented and qualified people, then only we can form a capable government,” he said.
He then reminded Umno that the general election would be won primarily on the support of the general populace, the overwhelming majority of which are non-members.

http://www.themalaysianinsider.com/malaysia/article/let-the-smart-join-dr-m-urges-umno/
Posted by Joshua Lopez at 11:25 AM