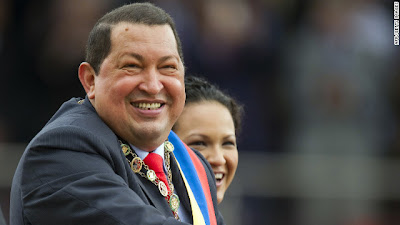 May The Blessings, Love & Care Of Christ Jesus Be Upon You Mr.Chavez, Amen.

Caracas, Venezuela (CNN) -- Speculation and messages of support surged in Venezuela Wednesday, a day after President Hugo Chavez announced he would travel to Cuba for surgery.
Doctors there will remove a lesion in the coming days from the same area of his body where doctors removed a cancerous tumor last year, Chavez said.
The 57-year-old Venezuelan leader told state media in a phone interview late Tuesday that there was a high likelihood that the lesion was cancerous, due to its location, which he did not disclose.
"If it turns out to be malignant there will surely need to be another phase of radiation therapy, and this would slow me down, of course," he said. In June, Chavez said doctors in Cuba had removed a cancerous tumor but did not specify what type of cancer it was.
He announced in October that treatment had cured him of cancer. Word of the new operation, which Chavez first announced on state television Tuesday afternoon, comes at a critical time, about seven months ahead of a presidential election.
"To my competitor, a son of God as I am, I wish him a successful operation, a quick recovery and a long life," opposition candidate Henrique Capriles Radonski said Wednesday in a Twitter post. The president's allies sent strong messages of support.
"The president will have his treatment. The president will be with us in the campaign, he will be our candidate and he is our candidate for October 7. ... The revolution will continue with Chavez in front," said Diosdado Cabello, president of Venezuela's National Assembly.
But some Venezuelans said they were skeptical.
"What surprises me is that the president had said before that his cancer was completely cured, so it took all of us by surprise," attorney Lourdes Rivas said. "There is great anguish and uncertainty about whether he will be a candidate with such poor health."
Store owner Carlos Picardo said he was confident the Venezuelan president would pull through.
"Of course it's quite sensitive, but he is going to come out of this like he has come out of everything else. He will survive this. And if he does not, well, he is mortal like all of us," he said.
In his interview with state television late Tuesday, Chavez said he was confident he would leave a legacy in Venezuela, no matter what doctors discover.

"Truly at this stage of life...I am no longer myself. Truly I am the people, and I say this with much humility, but that's how I feel. Independently of the days, years, et cetera that may be left in my physical life, I know that when I truly leave...I will remain alive for many years...I live in the people and the country," he said.