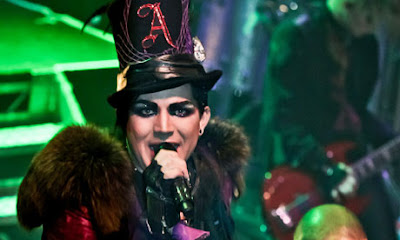 Queen have announced that they are returning to the site of their final concert with Freddie Mercury, this time with Adam Lambert in tow. The American Idol runner-up will take the mic for Queen's headlining performance at the Sonisphere festival in Knebworth.

"I'm sure Adam would meet with Freddie's approval!" Brian May declared in a statement. This isn't Lambert's first time performing with his idols: Queen's May and Brian Taylor appeared with the singer on his penultimate American Idol episode, and Lambert joined them for a gig at November's MTV Europe music awards. "Judging by my incoming mail," May said, "this decision will make a lot of people very happy."

Queen last played at Knebworth in August 1986, before a crowd of 120,000 people. It was the end of their final tour with Mercury, who died five years later. "I remember Knebworth as being the most incredible gig," Taylor said. "It will be a real challenge to complete the circle by returning with Adam." The younger singer seems aware of the stakes. "I'm honoured to be able to pay my respects to Freddie's memory," Lambert admitted. "He's a personal hero of mine and I am deeply grateful for the chance to sing such powerful music for fans of this legendary band."
Sonisphere will take place at Knebworth Park from 6 to 8 July. Other performers include Kiss, Evanescence, Marilyn Manson and the reunited Faith No More. Tickets go on sale Thursday at 9am.

http://www.guardian.co.uk/music/2012/feb/21/queen-adam-lambert-freddie-mercury
Posted by Joshua Lopez at 10:26 AM