Syria is A complicated puzzle says King Abdullah Of Jordan 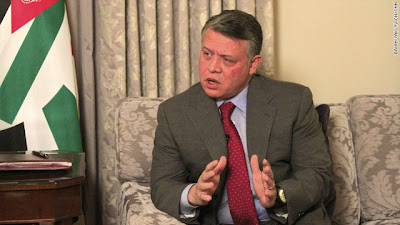 "It's a very complicated puzzle and there is no simple solution. If you can imagine Iraq being a simple solution to move Iraq into the light a couple of years ago and it's different in Libya, so it has everybody stumped and I don't think anybody has a clear answer on what to do about Syria." -King Abdullah Of Jordan.
By Suzanne Kelly, CNN.

He was the first Arab leader to call for Syrian President Bashar al-Assad to step down, yet after months of violence and a less than successful effort by the Arab League to stop the killing of protesters, King Abdullah of Jordan says don't expect change in Syria overnight.

"I don't see Syria going through many changes. I think what you're seeing in Syria today, you will continue to see for a while longer," Abdullah said in an interview with Security Clearance.

"It's a very complicated puzzle and there is no simple solution. If you can imagine Iraq being a simple solution to move Iraq into the light a couple of years ago and it's different in Libya, so it has everybody stumped and I don't think anybody has a clear answer on what to do about Syria."

Abdullah is in Washington to meet with President Barack Obama and his administration as Jordan makes a renewed push to restart peace talks between Israelis and Palestinians in the midst of the Arab Spring, which for the past year has engulfed the region in turmoil and change.
Jordan sits in a tough spot. A relatively small country of just 6 million, it shares a border with Syria and has been taking in waves of people fleeing violence. To the west, there is Israel and tensions with Iran over it's nuclear program. While Israeli officials have played down the idea of taking military action against Iran in recent days, Abdullah is opting for a "big picture" solution, which of course, he believes ultimately leads back to the peace process.

"The saber-rattling from both sides we have heard on a very regular basis over the past couple of years. My answer to military options on Iran: If you solve the Israeli-Palestinian problem, then Iran is no longer a military problem for you because what are their positions against Israel? The future of the Palestinians and the future of Jerusalem. If we solve that with the peace problem, then the Iranian threat is taken off the table. I think that's a much easier and cheaper way of solving the problem."

When it comes to Iran and Syria, sometimes where you sit makes all the difference in what you see. Take, for example, shared concerns about Iranian influence in Iraq as the United States pulls out troops.

"I think if you were in an Iranian's shoes and you were looking at the region and where they would like to play an influence, what's obviously happening in Syria is going to affect them negatively, because they feel that they're losing an ally if something happens with the regime or as it is today, because of the internal dimensions of Syria, it's not as an effective partner for the Iranians, so naturally I think the Iranians will be looking towards Iraq and having a stronger influence there."