Salma Hayek, Knight Of The Legion of Honour, France. 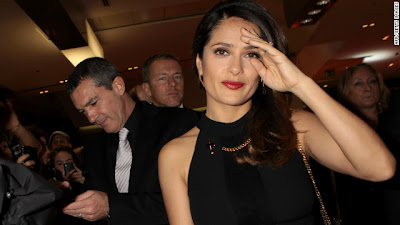 (CNN) -- Actress Salma Hayek has been named a knight of the Legion of Honour in France, according to an official government publication.
Hayek, 45, is a Mexican-born actress and producer. The notice in the Official Journal of the French government does not elaborate on why she is being honored, but cites her as an "active member of charities, 23 years of services."
The legion is France's highest national decoration and "rewards the outstanding merits of citizens in all walks of life, regardless of social, economic or hereditary backgrounds," according to the website of the Grand Chancellery of the Legion of Honour.
Posted by Joshua Lopez at 9:49 AM