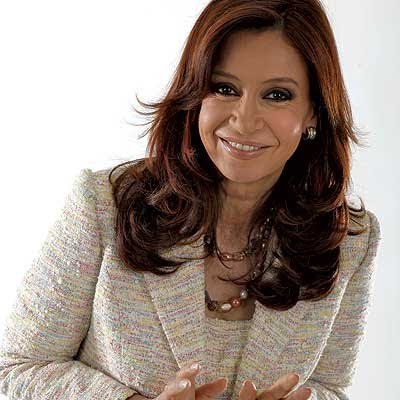 Get Well Soon Madame & Drive Your Country To Further Heights!
Presidential spokesman Alfredo Scoccimarro said that Mrs Kirchner was recovering well after her three-and-a-half hour operation.
“The surgery on President Cristina Fernandez de Kirchner was carried out without any complication,” he said, adding that she will remain in hospital for about 72 hours. The government last week announced her diagnosis of papillary carcinoma, detected during a routine medical checkup just before Christmas.
Tests suggested it had not spread beyond her thyroid, so the condition should be curable without chemotherapy, doctors said. They added that the 58-year-old president has a better than 90 per cent chance of recovery.
Experts say thyroid removals are about as routine as cancer surgeries can be, although the process is not without risk: surgeons must take care not to damage a nearby nerve that guides the vocal cords, or to remove the adjacent parathyroids, which regulate the body’s calcium supply.

“Cristina’s operation was successful,” TV station Cronica said during a news broadcast. Vice President Amado Boudou was put in charge shortly before the operation, and will remain as the country’s constitutional leader for 20 more days while Mrs Kirchner takes medical leave.
The president, who was easily re-elected in October and started her second four-year term in December, is often referred to in Argentina by her first name. Supporters lined the streets near the hospital, holding signs that said “Strength Cristina.”
Mrs Kirchner is only the latest sitting South American leader to be diagnosed with cancer. Presidents Fernando Lugo of Paraguay, Hugo Chavez of Venezuela and Dilma Rousseff of Brazil all have undergone treatments recently.
Mr Boudou, her former economy minister, is expected to work closely with other Cabinet members while she recuperates at her home in Calafate, in far-southern Argentina, and make no major policy changes.
Argentina all but shuts down for the summer holidays in January and February, so her diagnosis and surgery came at a relatively calm time. - The Telegraph.
Posted by Joshua Lopez at 1:26 PM