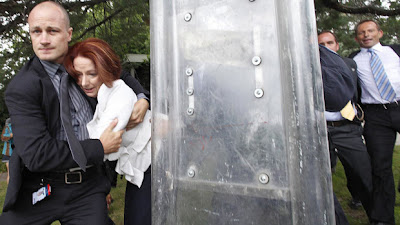 Australian Prime Minister Julia Gillard stumbled and was caught by a security guard as riot police forced a path for her through a crowd of rowdy protesters following a ceremony to mark Australia’s national day Thursday.
Some 200 supporters of indigenous rights surrounded a Canberra restaurant and banged its windows while Ms. Gillard and opposition leader Tony Abbott were inside officiating at an award ceremony.

Around 50 police escorted the political leaders from a side door to a car. Ms. Gillard stumbled, losing a shoe. Her personal security guard wrapped his arms around her and supported her to the waiting car, shielding her from the angry crowd.

The protesters had been demonstrating for indigenous rights nearby at the so-called Aboriginal Tent Embassy, a ramshackle collection of tents and temporary shelters in the national capital that is a centre point of protests against Australia Day.
Australia Day marks the arrival of the first fleet of British colonists in Sydney on Jan. 26, 1788. Many Aborigines call it Invasion Day because the land was settled without a treaty with traditional owners.
Mr. Abbott appeared to be the target of protesters, who chanted “shame” and “racist” outside the restaurant.
The Tent Embassy celebrated its 40th anniversary on Thursday. Mr. Abbott had earlier angered indigenous activists by saying it was time the embassy “moved on.”
Ms. Gillard was unharmed and hosted another Australia Day function for foreign ambassadors at her official residence in Canberra later Thursday.

“The only thing that angers me is that it distracted from such a wonderful event,” Ms. Gillard told reporters. “I am made of pretty tough stuff and the police did a great job,” she added.