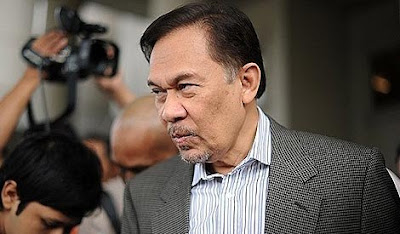 Influential British newspaper The Guardian says Anwar Ibrahim will likely be handed a guilty verdict in the Sodomy II trial, and warned that it will severely hurt Malaysia’s reputation in terms of democracy.

In a hard-hitting column by assistant editor Simon Tidall, said the only person to blame should this happen is Prime Minister Najib Abdul Razak.

Tidall warned that “the portents do not look good” for Anwar, as the case winds to a close.
Plying scathing criticism over what he sees as Najib's “authoritarian tendencies” and “blatant scare-mongering”, the foreign affairs columnist urged Malaysia's Western allies to “take a closer look at their friend”.

“Malaysia is valued as a trading partner, counter-proliferation collaborator, and non-combatant member of the Afghanistan coalition. But the government's human rights record and democratic practices merit closer scrutiny...

“As Anwar's ordeal approaches an ugly climax, it seems increasingly unlikely that these benchmarks will be met. The next question is: what will Malaysians and their friends do about it?”

According to Tidall, the sodomy charges, which were levelled soon after Pakatan Rakyat took over five states in the 2008 general election, “hardly seems coincidental”.

“As the charismatic leader of the opposition coalition, Anwar represents the biggest challenge to (Najib's) continuing ascendancy,” he says.

Describing the PM as someone “born to power” and “accustomed to wielding it”, Tidall argued that Najib's flat rejection of a conspiracy against Anwar was suspect, considering the latter's 1998 sodomy charge.

“The recycling of sodomy accusations... suggests a lack of originality characteristic of the prime minister,” Tidall says.

The assistant editor also opined that the timing of the impending verdict, alongside the lead-up to the 13th general election, also lends credence to the conspiracy theory.

“Najib gives every appearance of preparing for snap polls on the assumption that Anwar will be out of the way and the opposition (will be) decapitated,” he said.

Adding to this, he said, is the recently-passed Peaceful Assembly Bill, which Tidall sees as a sign that Najib is not taking any chances.

Coming on the tails of the Bersih 2.0 rally in July, he said that the Bill “reneged on shaky, post-July promises of civil rights reforms” and shows that Najib is succumbing to “paranoia”.
“Now Najib is taking no chances as his lieutenants warn that Anwar is fomenting an Arab Spring-style uprising – a so-called ’hibiscus revolution’... ,” writes Tidall.

Anwar has been charged with sodomising his then aide Mohd Saiful Bukhari Azlan on June 26, 2008.

Following submissions earlier this week, the defence is due to reply tomorrow to points made by the prosecution. Justice Mohamad Zabidin Mohd Diah will then set a date for the verdict.

http://my.news.yahoo.com/uks-guardian-predicts-anwars-conviction-080022352.html
Posted by Joshua Lopez at 10:38 AM